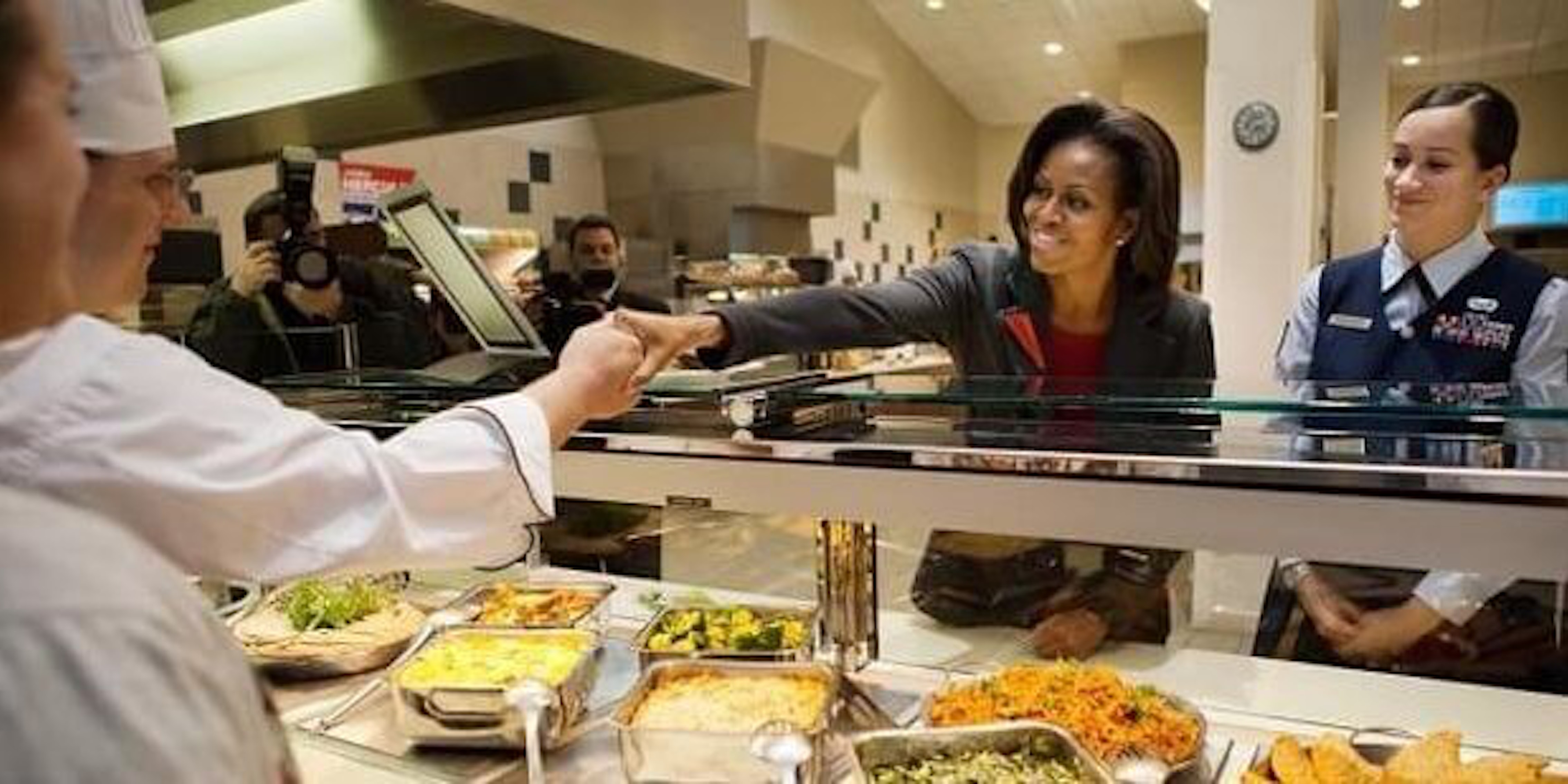 They timed the announcement on her birthday.

Today the Trump administration announced its proposal to serve fewer vegetables and more fries and pizza in school lunches.

The timing of the announcement to roll back the guidelines, which were created at the initiative of former First Lady Michelle Obama under her Let’s Move! healthy living campaign, immediately struck people as suspicious. Today is Obama’s birthday.

Some schools and food manufacturers, as well as children, educators, and parents, have long complained about the rules as expensive and wasteful. So the change, which was announced by the Agricultural Department, may have been merely addressing such complaints.

“Schools and school districts continue to tell us that there is still too much food waste and that more common-sense flexibility is needed to provide students nutritious and appetizing meals,” Sonny Perdue, the agriculture secretary, said in a statement. “We listened and now we’re getting to work.”

Conspiracy-minded folks felt that the move was more about Trump’s desire to undo the Obamas’ legacy and that choosing to do so on Michelle Obama’s birthday was just the cherry on the proverbial sundae. Many criticized the proposal’s potential to worsen the childhood obesity epidemic.

As ever, Trump supporters applauded the plan to feed children fewer green vegetables and more starch and saturated fats.

“Who the heck is Michelle Obama to tell schools what they can serve kids for lunch? And so what if it’s her birthday? Happy birthday! Now pass the burger and fries,” tweeted Dinesh D’Souza.

People who think schools should serve healthy food pushed back.

“If #Obama had found a cure for cancer, he would be urging people not to take it, and offering a placebo instead,” commented @RobertJWalsh.

“Not even child nutrition standards are safe from #Trump,” said Maya Wiley. Mike Levin said, “Just because Trump eats poorly doesn’t mean the nation’s children should have to eat poorly.”

Sorry the FLOTUS who’s Black wanted America’s kids not to stroke out at age 12.

I just told my 10 year old about Trump wanting to take away fruits and veggies at school and add more pizza and potatoes and she started breathing heavy, cracked her knuckles and said, “that’s IT! I’m ready to fight!”.

May be it was all the healthy food in the Obamalunch that made Owen gay and not obama-care ,, WOW

The need to undo anything that relates to his predecessor is remarkable. Even if it is as simple as going against the advice of every parent to ever pack a lunch.

We live in a time of the astoundingly shallow. https://t.co/skCVqAd1KA

It was a waste of money. Kids threw the food away.

Trump admin announces repeal of Michelle Obama's school lunch guidelines on her birthday https://t.co/ea6kjysEnU BREAKING: There could be no coincidence that the president obsessed with destroying the Obamas' legacy took aim at the former First Lady on her birthday. pic.twitter.com/EWz48lHbrR

Because Michelle Obama had the nutritious school lunch agenda.

Public comment on the proposed changes begins on Jan. 21.