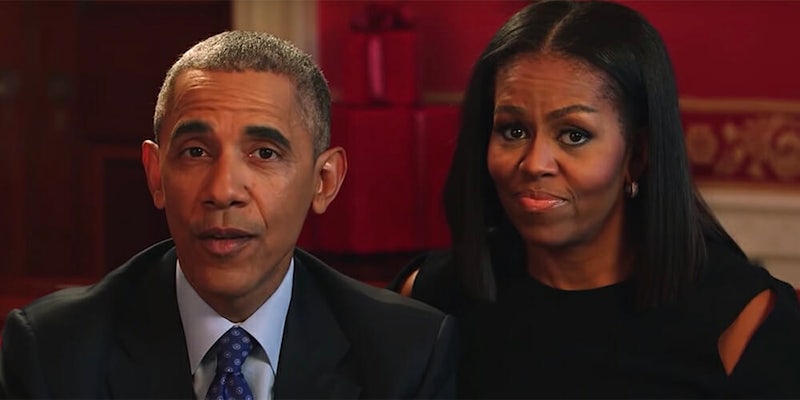 Barack and Michelle Obama are still thriving after leaving the White House.

Entertainment Weekly reports that the Obamas’ production company Higher Ground just struck a deal with Spotify to create podcasts meant to give a platform to diverse voices.

“We’ve always believed in the value of entertaining, thought-provoking conversation,” former President Barack Obama said in a statement on Thursday. “It helps us build connections with each other and open ourselves up to new ideas. We’re excited about Higher Ground Audio because podcasts offer an extraordinary opportunity to foster productive dialogue, make people smile and make people think, and, hopefully, bring us all a little closer together.”

Spotify and Higher Ground stated they would announce the details of the deal later, but according to CNN Business, content could be released as early as next year.

“We’re thrilled to have the opportunity to amplify voices that are too often ignored or silenced altogether, and through Spotify, we can share those stories with the world,” Michelle Obama said. “Our hope is that through compelling, inspirational storytelling, Higher Ground Audio will not only produce engaging podcasts, but help people connect emotionally and open up their minds—and their hearts.”

Last spring, Higher Ground announced a multi-year deal with Netflix. The former president and first lady are slated to produce scripted, unscripted, and documentary series. The lineup was announced in April and includes a scripted anthology and a children’s series.

Similarly to the Netflix contract, the Spotify deal is expected to be multi-year.

“President Barack Obama and Michelle Obama are two of the world’s most important voices,” said Dawn Ostroff, the chief content officer at Spotify, in a statement released Thursday. “It is a privilege to be working with them to identify and share stories that will inspire our global audience, which looks to Spotify for unique, breakthrough content.”