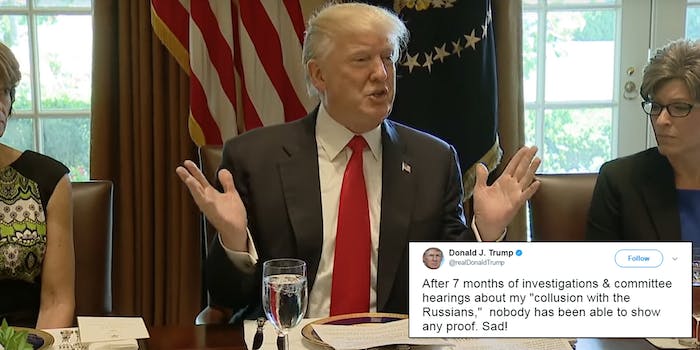 Trump goes on tremendous tweetstorm this morning over Russia investigation

President Donald Trump continued to give in to his Twitter addiction on Friday morning, going on an intense tweetstorm about the ongoing probe into Russian interference in the election and collusion with his campaign.

“After 7 months of investigations & committee hearings about my ‘collusion with the Russians,’ nobody has been able to show any proof. Sad!”

After 7 months of investigations & committee hearings about my "collusion with the Russians," nobody has been able to show any proof. Sad!

Despite the phony Witch Hunt going on in America, the economic & jobs numbers are great. Regulations way down, jobs and enthusiasm way up!

Trump’s early morning tweets followed several he wrote on Thursday afternoon where he lamented former presidential candidate Hillary Clinton being cleared of charges by the FBI and implying that she should have been investigated by the FBI for colluding with Russia.

In Wednesday’s tweets, Trump appeared to gloss over the fact that he was implying that Clinton colluded with the Russians to help ensure her own defeat—as the intelligence community determined last year that Moscow interfered in the 2016 presidential campaign to help Trump get elected.

Trump’s tweets come as congressional probes into Russian ties and interference in the election continue to steam ahead and a separate investigation into whether Trump is guilty of obstruction of justice also pushes forward.

Specifically, Special Counsel Robert Mueller is reportedly looking into Trump’s conversations with former FBI Director James Comey, where he allegedly asked him to drop the agency’s investigation into former National Security Adviser Michael Flynn. Mueller is also investigating other conversations Trump had with the intelligence community.

Meanwhile Trump, in both tweets and statements, has denied any collusion with Russia and has suggested that Comey lied under oath about their interactions—even threatening to release “tapes” of their conversations. However, it is unclear if those actually exist.