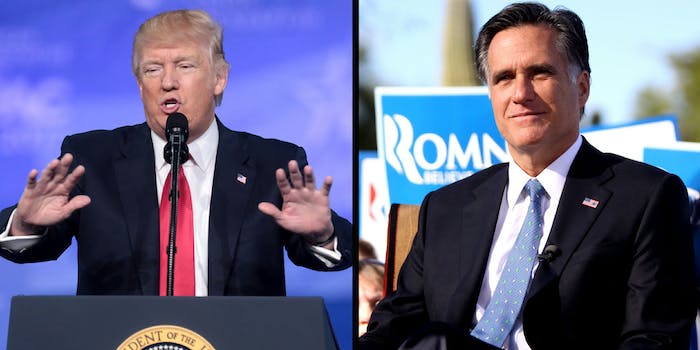 Romney has been exploring a run to take Sen. Orrin Hatch's seat in 2018.

Trump’s pressuring on Hatch, who has served in the Senate since 1977, will culminate with a high-profile visit to Utah on Monday where he will sign an executive order to reduce the size of several national monuments. Trump is also expected to praise the senator, according to Politico.

Romney has reportedly been exploring a Senate run for Hatch’s seat in 2018, and sources close to the former Massachusetts governor told the news outlet they are frustrated with Hatch’s reluctance to rule out a possible reelection and believed Trump’s motivation is to block Romney from getting into the Senate.

During the 2016 campaign, Romney was harshly critical of Trump and made a speech where he called then-candidate Trump a “phony” and a “fraud” as rumors swirled of Republican efforts to try and stop Trump from winning the party’s nomination.

“His promises are as worthless as a degree from Trump University,” he said during the speech. “He’s playing the American public for suckers: He gets a free ride to the White House and all we get is a lousy hat.”

More recently, Romney called on Trump to apologize following his much-criticized response to the white nationalist rally held in Charlottesville, Virginia, in August.

“Whether he intended to or not, what he communicated caused racists to rejoice, minorities to weep, and the vast heart of America to mourn,” Romney wrote on Facebook. “His apologists strain to explain that he didn’t mean what we heard. But what we heard is now the reality, and unless it is addressed by the president as such, with unprecedented candor and strength, there may commence an unraveling of our national fabric.”