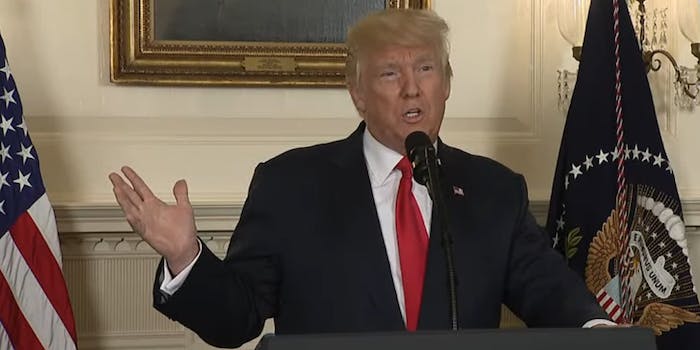 After several days of facing mounting criticism for not specifically denouncing the white supremacist groups at the center of violence in Charlottesville, Virginia over the weekend, President Donald Trump called racism “evil” during a speech at the White House on Monday afternoon.

Trump’s remarks came two days after violence in Charlottesville reached a boiling point, culminating in the death of Heather Heyer, a 32-year-old counterprotester, when a driver with suspected ties to neo-Nazi groups plowed his car into a crowd and sped away. The driver, James Alex Fields Jr., of Ohio, has been charged with one count of second-degree murder, three counts of malicious wounding, and hit-and-run.

The president, reading from a teleprompter, started off the statement by talking about the economy and the stock market, touting what he believes are accomplishments of his presidency before pivoting to the incidents over the weekend, which he called “horrific.”

“Racism is evil, and those who cause violence in its name are criminals and thugs,” Trump said.

Trump said “anyone who acted criminally” during the violence would be held “fully accountable.” Trump also specifically called out the Ku Klux Klan, neo-Nazis, and white supremacists, condemning them as “repugnant to everything we hold dear as Americans.”

Trump also repeated the same things he said about the events in Charlottesville during his initial comments on Saturday. He did not take any questions after the statement.

Trump: "To anyone who acted criminally in this weekend’s racist violence, you will be held fully accountable" https://t.co/69j9CeFqQb

Trump had been criticized since Saturday when he made comments about Charlottesville, condemning violence from “many sides.” The lack of any forceful denouncement against hate groups drew widespread criticism from lawmakers across party lines, activist groups, and everyday Americans online.

The president had been silent since his initial remarks on Saturday; however, top members of his administration—including Vice President Mike Pence and Attorney General Jeff Sessions—had made strong denouncements against white supremacy in the days following the violence.