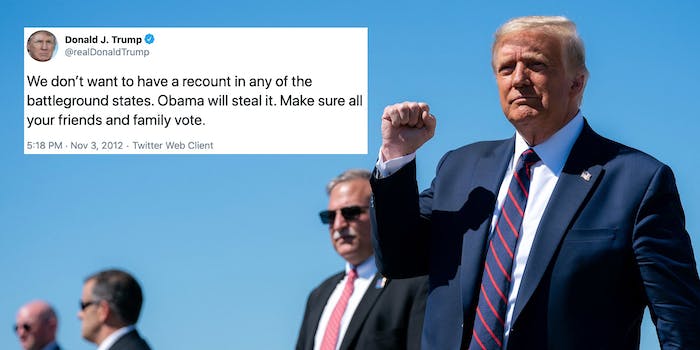 Naturally, the president once said something he now disbelieves.

President Donald Trump once argued that recounts are used to steal elections in a newly unearthed tweet.

Trump decried in 2012 discussions surrounding a recount over the claim that then-president Barack Obama would “steal” the election.

“We don’t want to have a recount in any of the battleground states,” Trump said. “Obama will steal it. Make sure all your friends and family vote.”

The tweet resurfaced on Wednesday just as Trump began demanding that votes in Wisconsin be recounted. Trump and his campaign have repeatedly made unsubstasiated and false claims about voter fraud as numbers in the state shift favorably towards Democratic candidate Joe Biden.

Not only that, the Trump campaign has even threatened to sue Michigan and Pennsylvania in an effort to stop more votes from being counted.

The irony of Trump’s sudden about-face wasn’t lost on Twitter, who quickly pointed out the president’s reversal.

Others laughed at how poorly the tweet had aged, labeling the president’s actions as totally hypocritical.

But it wasn’t the only tweet from Trump’s orbit that has come back to haunt the president.

It turns out Eric Trump, the president’s son, blamed Democratic candidate Hillary Clinton and Green Party candidate Jill Stein in 2016 for the death of 5,000 children after the candidates requested a recount in Wisconsin. An article shared by Eric suggests that the money spent on the recount could have been invested instead in malaria prevention.

Trump and much of the GOP also called Stein a “scam” artist at the time as well for demanding recounts in the very states the president is now targeting.

The president’s old tweet comes as millions of mail-in votes continue to be counted across the country. Current numbers show Biden in the lead with 237 electoral votes and Trump with 214.