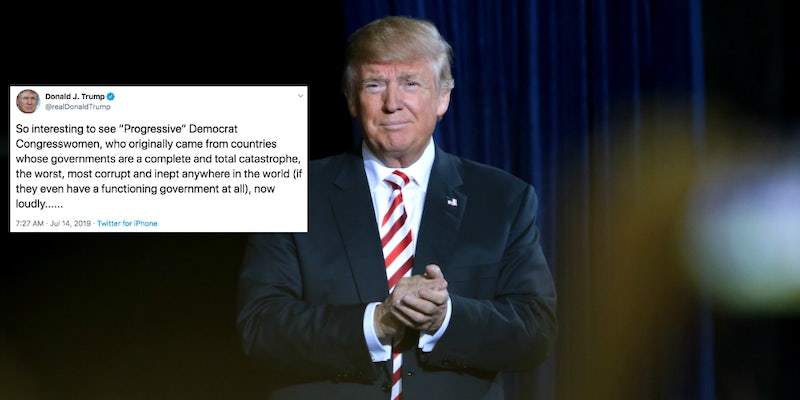 All four women are Americans and three of them are U.S.-born.

On Sunday morning, President Donald Trump told four congresswomen of color to “go back” to the “totally broken and crime infested” countries that they came from.

Only the women didn’t “come from” anywhere–all four women are Americans and three of them were born in the U.S.

So interesting to see “Progressive” Democrat Congresswomen, who originally came from countries whose governments are a complete and total catastrophe, the worst, most corrupt and inept anywhere in the world (if they even have a functioning government at all), now loudly……

….it is done. These places need your help badly, you can’t leave fast enough. I’m sure that Nancy Pelosi would be very happy to quickly work out free travel arrangements!

Trump targeted his attack at Reps. Alexandria Ocasio-Cortez (D-N.Y.), Ilhan Omar (D-Minn.), Rashida Tlaib (D-Mich.) and Ayanna Pressley (D-Mass.)–all of whom are American and women of color. Ocasio-Cortez was born in the Bronx, New York. Pressley was born in Cincinnati, Ohio. Tlaib was born in Detroit, Michigan. And Omar, who is a Somalian refugee, has been in the U.S. since the early ’90s.

“Mr. President, the country I ‘come from,’ & the country we all swear to, is the United States,” Ocasio-Cortez wrote in response.

Mr. President, the country I “come from,” & the country we all swear to, is the United States.

But given how you’ve destroyed our border with inhumane camps, all at a benefit to you & the corps who profit off them, you are absolutely right about the corruption laid at your feet. https://t.co/HLKQCotR8T

Trump was essentially trying to butt into an ongoing feud between the progressive congresswomen and House Speaker Nancy Pelosi (D-Calif.)

Instead of letting Trump further divide them, Pelosi came to the women’s defense, calling out the president’s racist tweet.

“When Donald Trump tells four American Congresswomen to go back to their countries, he reaffirms his plan to ‘Make America Great Again’ has always been about making America white again,” she wrote.

Like, Ocasio-Cortez, Pelosi then tried to direct attention back to the border as well as the Immigration and Customs Enforcement (ICE) raids taking place across the nation. The raids were set to begin around the same time Trump’s tweets went out.

“I reject Donald Trump’s xenophobic comments meant to divide our nation,” she wrote. “Rather than attack Members of Congress, he should work with us for humane immigration policy that reflects American values. Stop the raids.”

I reject @realDonaldTrump’s xenophobic comments meant to divide our nation. Rather than attack Members of Congress, he should work with us for humane immigration policy that reflects American values. Stop the raids – #FamiliesBelongTogether!

Trump’s tweets led #RacistInChief, #TrumpIsARacist, and #RacistTrump to trend on Twitter, with the consensus being that Trump is racist.

How are we not outraged? The President of the United States just told black and brown skinned women, born in this country, to go back the countries they were born in! This is a new low even for the #RacistInChief #RacistTrump

Saluting these women. Stay pushing. Stay shining. Stay working. Stay a pain in the ass of the #RacistInChief and all his co-horts. Stay true to who you are. Stay safe. Stay together. Stay making us proud. #FourQueens pic.twitter.com/jkcXe6Z96F

This is racist. And I see Trump people are trying to spin this to just be about Rep. Omar, but we all know that’s a lie. But even if it were just about Rep. Omar, it would still be racist. We don’t tell people we’ve welcomed into this country to “go back.” https://t.co/v1uCPqCRVK

POTUS: They need to respect our laws and come here legally

Also POTUS: Go back where you came from

Don’t be fooled by him or his sycophantic followers. It has nothing to do with law and all to do with racism

Remember that time when Donald Trump questioned the authenticity of a white president's birth certificate or told a group of white women to go back to their home countries? Yeah, me neither…#TrumpIsARacist #RacistInChief

#TrumpIsARacist lol are yall just figuring this out?? im- pic.twitter.com/w0dRgttIb9