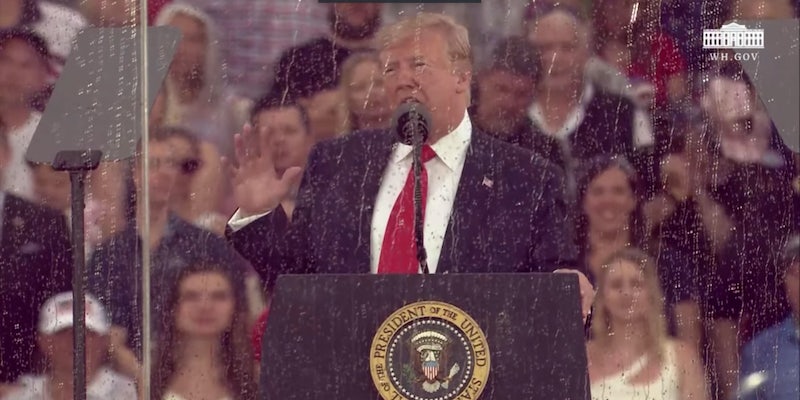 Was there a hidden message in the mistake?

President Donald Trump boasted that his Fourth of July speech would be “one of the biggest celebrations in the history of our country,” and he may have stayed true to his words. It definitely was one of the biggest slips he made in recent times, claiming in his speech that U.S. armies had protected the airports during the Revolutionary War, which ended in 1783. He likely missed the memo that the first airplanes were only made in 1903.

“Our army manned the airports,” he said, with the first reference to the “airport” trailing off, “it rammed the ramparts, it took over the airports, it did everything it had to do, and at Fort McHenry, under the rocket’s red glare it had nothing but victory. And when dawn came, their star-spangled banner waved defiant.”

While the speech prompted cheers from the crowd, people were quick to freak about the airplane gaffe. There was even a spike in Google search for “airplane invention.” Many people started sharing what it would’ve been like to have airports back then, letting their imagination run wild with the hashtag #RevolutionaryWarAirportStories:

Martha, I fear we've hit a massive delay in our departure times, as we have been forced to check our muskets and duffle bags in. With each second that passes, I become less certain of my ability to obtain a windo seat. Tis a regrettable situation.#RevolutionaryWarAirportStories

The Boston Tea Party was *not* in anger over British taxation but rather because Spirit Airlines decided to start charging for tea on flights. #RevolutionaryWarAirportStories https://t.co/buhdrH82en

Dearest Martha, please find enclosed a tracking number for my lost luggage at Philadelphia. It shall arrive to Mount Vernon via carriage in 21-25 days. Also enclosed is a receipt for the cost of parking my horse at Dulles for the weekend. #RevolutionaryWarAirportStories

The more poignant takeaway was that immigrants, so ruthlessly vilified in his rhetoric and affected both by his policies as well as the hate-speech that’s often inspired by them, probably know more about American history because they have to go through a test for it. Many pointed out this irony on Twitter:

When I became a US citizen, I had to take a history & politics test.

Is it really true that there is no such test for presidents?

"The battle at Fort McHenry that inspired Key to write "The Star-Spangled Banner" was in 1812, not the American Revolution."https://t.co/RZ6ioH7MsE

No, he didn't say "AIRPORTS" right? Incredible, how white American made such big mistake electing celebrities Donald Trump to become the 1st man of the free World. I am a legal immigrant and I know about American history twice more than him. Who wrote the speech. https://t.co/cQq31JPSV7

The president would fail a citizenship test, yet he’s telling asylum seekers they’re not worthy. https://t.co/mavMEZnuW2

As the tweet by user @FilmnSports21 shows, this slip in his speech was ironic at a time when Trump continues to fight for the U.S. census needing citizenship question and amid reports of horrible, concentration camp-like atmosphere where migrant children are being held under his policies.

While the “airport” comment is good meme material, and likely a mistake, it was craftily placed at a time when the immigration debate remains divisive. Airports, though not the port of entry for many undocumented migrants or asylum seekers, still remain a symbol of entry into the country. Especially for a president whose anti-immigration stance has been so core to his campaign and presidency, Trump’s placement of the word in a sentence about the Army taking over airports, while landing a “victory,” rings an ominous message.