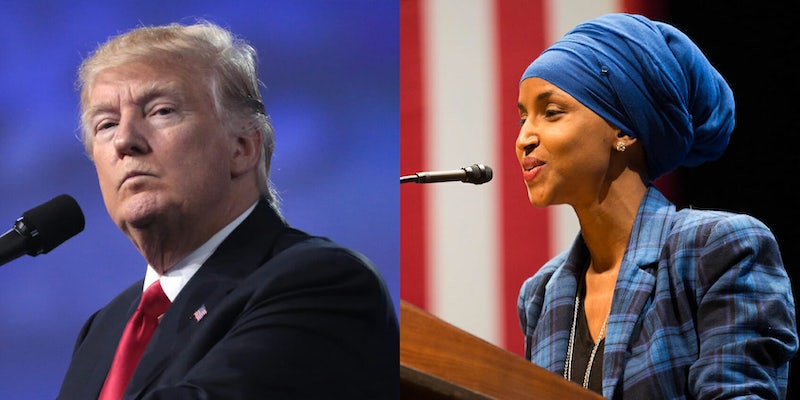 The petition has more than 28,000 signatures.

A petition is calling on Twitter and Facebook to suspend President Donald Trump’s accounts in the wake of him sharing a video that interspersed remarks made by Rep. Ilhan Omar (D-Minn.) with images from the Sept. 11 terrorist attacks.

As of Tuesday morning, the petition had just over 28,000 signatures. It is addressed to the heads of Facebook and Twitter, Mark Zuckerberg and Jack Dorsey. The petition is sponsored by Women’s March.

It accuses the president of “inciting violence,” and asks the two tech leaders not to “give hate a platform.”

“The president will not stop,” the petition reads. “He will continue to issue hateful messages from the White House. But you can stop him from issuing those messages on your platforms.”

The president shared the video on Twitter last week, and it remains up.

Earlier this week, Omar said she has seen an “increase in direct threats on my life” following Trump’s video. House Speaker Nancy Pelosi (D-Calif.) said she has asked authorities to conduct a “security assessment” to protect the Minnesota lawmaker and called on Trump to remove the tweet.

Numerous other Democrats have also come to Omar’s defense.

Last month a Twitter official said the company was discussing ways to “label” tweets that violate its terms of service but also serve “a particular purpose in remaining on the platform,” such as messages from the president.