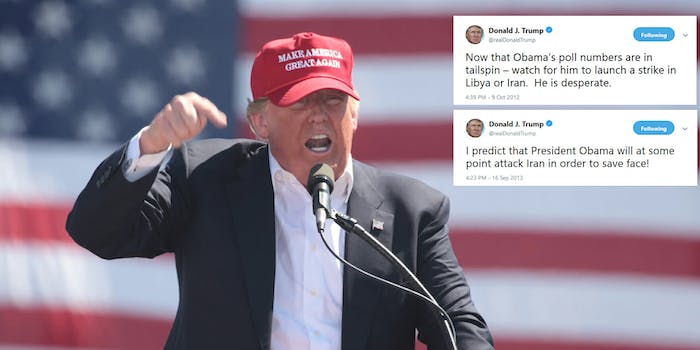 He had some thoughts about Obama and Iran several years ago.

The president said if Iran continued to “threaten” the United States, the country would face “consequences the likes of which few throughout history have ever suffered before.”

“To Iranian President Rouhani: NEVER, EVER THREATEN THE UNITED STATES AGAIN OR YOU WILL SUFFER CONSEQUENCES THE LIKES OF WHICH FEW THROUGHOUT HISTORY HAVE EVER SUFFERED BEFORE. WE ARE NO LONGER A COUNTRY THAT WILL STAND FOR YOUR DEMENTED WORDS OF VIOLENCE & DEATH. BE CAUTIOUS!” Trump tweeted.

Trump’s tweet followed Rouhani saying that war between the United States and Iran would be “the mother of all wars” and cautioned the president: “do not play with the lion’s tail, because you regret it eternally,” according to CNN.

While Trump has taken a hard-line stance against Iran, including announcing that the United States would withdraw from the Iran nuclear deal earlier this year, some people have pointed out several tweets the president sent out in the past that could hint to his sudden—all caps—threat toward Iran.

Back in the first term of President Barack Obama, when Trump was a Twitter troll who commented on politics, the now-president predicted several times that Obama would declare war on Iran to “save face,” or “get elected,” or would “launch a strike” against the country because of his poll numbers.

So does his stance on the underlying motivations for a potential attack against Iran—like he threatened on Sunday—still apply?

I predict that President Obama will at some point attack Iran in order to save face!

Don't let Obama play the Iran card in order to start a war in order to get elected–be careful Republicans!

I always said @BarackObama will attack Iran, in some form, prior to the election.

@BarackObama will attack Iran in order to get re-elected.

@BarackObama will attack Iran in the not too distant future because it will help him win the election. If the… (cont) https://t.co/WEJd30pR

While Trump isn’t a position to get re-elected until 2020, the president’s idea of stoking Iran for a boost in poll numbers could certainly be on his mind. As of mid-July, his approval rating was 42.9 percent, according to Real Clear Politics.

That being said, the last time Trump used such harsh rhetoric against a country, he wound up meeting with its leader. Now he’s showering praise on him.

Maybe this will be the same.

Obama, despite Trump’s predictions, made a peace deal with Iran instead of going to war.