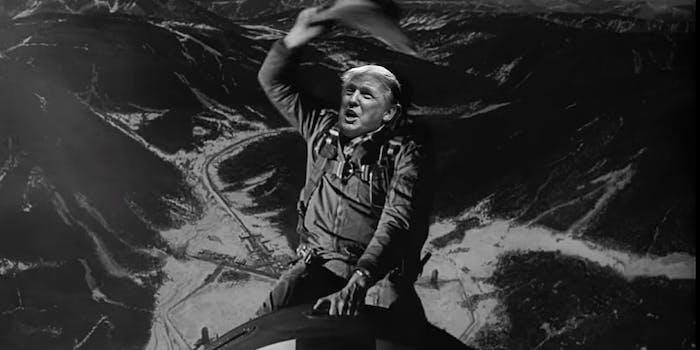 Secretary of State Rex Tillerson reportedly called President Donald Trump a “moron” after a meeting where the president said he wanted to substantially increase the United States’ nuclear arsenal.

NBC News reported on Wednesday morning that the meeting, which took place in late July, was in response to a slide Trump saw showing that the United States has reduced its nuclear weapons cache since the late 1960s. Trump wanted to increase the number of nukes, despite officials warning him of the “legal and practical impediments to a nuclear buildup” and assuring Trump of the country’s military strength.

As the news organization points out, a nuclear buildup would violate international disarmament treaties signed by every president since Ronald Reagan and could set off another worldwide nuclear arms race not seen since the Cold War. The president reportedly wanted a nearly tenfold increase in the number of nuclear weapons the United States has.

“If he were to increase the numbers, the Russians would match him, and the Chinese,” Joe Cirincione, a nuclear expert and MSNBC contributor, told NBC News.

The July 20 meeting was one of several that have left some officials concerned about Trump’s ability to comprehend world matters. The day before, a meeting about Afghanistan was derailed when Trump suggested firing the commander of U.S. forces in the country, according to the report. A second, smaller meeting, was scheduled to help Trump be more “focused.”

“It wasn’t just the number of people. It was the idea of focus,” a source told NBC News, adding that they thought they need to “slow down” and “explain the whole world” to the president.

The July 20 meeting led to Tillerson reportedly calling Trump a “fucking moron,” After NBC News revealed Tillerson’s insult, the secretary of state held an impromptu press conference where he reaffirmed his commitment to the president but did not outright deny calling Trump names. The State Department later released a denial that Tillerson called Trump a moron.

On Tuesday, in an interview with Forbes, Trump still seemed perturbed by Tillerson’s remarks and challenged him to compare IQ test scores–something he’s done to several other people in the past. White House Press Secretary Sarah Huckabee Sanders said later in the day that Trump’s IQ challenge was a “joke.”

Fake @NBCNews made up a story that I wanted a "tenfold" increase in our U.S. nuclear arsenal. Pure fiction, made up to demean. NBC = CNN!