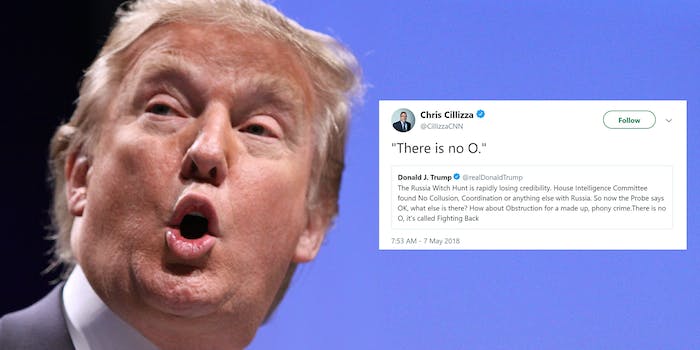 There should be some 'O.'

Today, President Donald Trump attacked Special Counsel Robert Mueller‘s probe into Russian interference in the 2016 election, saying it was staffed with “13 Angry Democrats” and that “There is no O, it’s called Fighting Back.”

The Russia Witch Hunt is rapidly losing credibility. House Intelligence Committee found No Collusion, Coordination or anything else with Russia. So now the Probe says OK, what else is there? How about Obstruction for a made up, phony crime.There is no O, it’s called Fighting Back

The 13 Angry Democrats in charge of the Russian Witch Hunt are starting to find out that there is a Court System in place that actually protects people from injustice…and just wait ‘till the Courts get to see your unrevealed Conflicts of Interest!

Nothing inherently sexual about that expect that… lol he said “no O.”

“O” can stand for orgasm, the act of climax during sexual intercourse.

Because, you know, when the president is denying he committed crimes that could be the basis for his impeachment, one might as well pretending he’s talking about sex.

Melania says under her breath, "'No O'? That sounds familiar." https://t.co/nPo13Ozeja

I hate to go to the gutter but I just can't help myself.

Is that what Stormy said?

Is that why you really paid the hush money?

Maybe Rudy could use it as his next ridiculous defense.
"Your Honor There is No O."https://t.co/ZxsZJF9g4c

I'm guessing there's never been an "O," when it comes to you. https://t.co/Z3EsGJ1UEI

That might be one the few statements from him that is completely believable.

This is not the first time Twitter has taken Trump’s tweets to have weirdly sexual undertones. Back in February 2017, the president lamented how “D should be easy.”

Maybe that’s why there’s “no O”