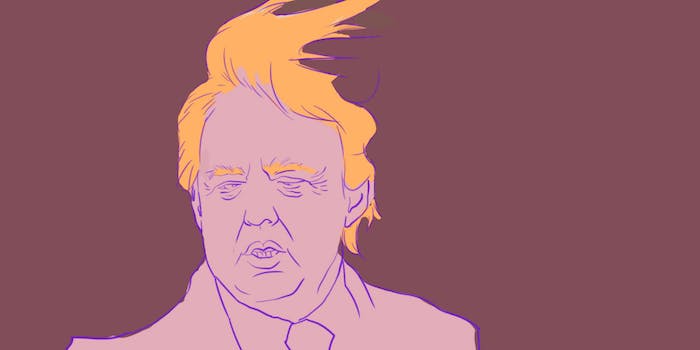 Donald Trump may be a master of Twitter, but Google? Well, not so much.

As Trump recently told Time, “I’m a very smart person,” which is the sort of gumption that’s taken him to the top of the 2016 Republican presidential field. However, as the real estate heir and former reality TV star revealed in a tweet on Sunday night, there may be a hole in his knowledge: how to use the Internet to find basic pieces of factual information.

Obama said in his speech that Muslims are our sports heroes. What sport is he talking about, and who? Is Obama profiling?

Trump’s tweet was a reaction to a speech given by President Barack Obama Sunday evening about America’s response to the terrorist threat posed by ISIS. In tandem with urging the world’s Muslims to reject the extremism represented by groups like ISIS, Obama warned about discrimination against American Muslims.

“Muslim Americans are our friends and our neighbors, our co-workers, our sports heroes—and, yes, they are our men and women in uniform who are willing to die in defense of our country,” he said. “We have to remember that.”

Trump, who has indicated he was open to ideas like requiring all Muslims to carry cards identifying them by religion and building a centralized database of all Muslims in the United States, easily could have answered his question with a quick Google search.

Had Trump typed “Muslim sports stars” into Google prior to tweeting, the search engine would have pulled up a number of useful Wikipedia pages listing major Muslim American sports stars, such as:

Trump recently insisted to Meet The Press host Chuck Todd that, “I have a very good memory,” however, he appeared to forget about Ali, who received an award from Trump for supporting his Celebrity Fight Night.

Also, Tyson endorsed Trump’s current campaign for the Oval Office earlier this year. As Mother Jones notes, Trump and Tyson go way back, with the real estate magnate hosting many of the boxer’s fights at his Atlantic City, New Jersey, casinos and mounting an unsuccessful attempt to help Tyson avoid going to jail for rape.

Apparently Trump forgot about his relationship with both of those athletes and also didn’t try searching Google, which likely would have jogged his memory.

If anyone is curious, the address is www.google.com.