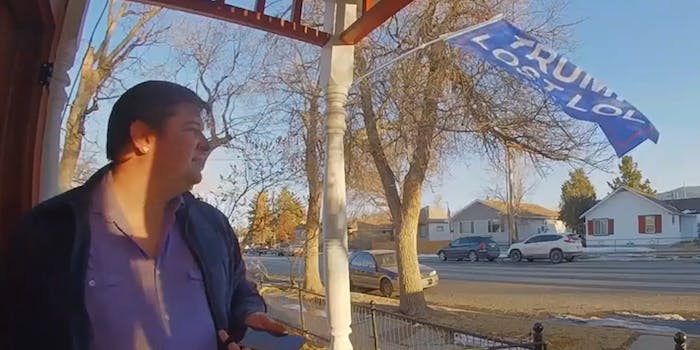 'When are you gonna take your f*ggot-ass flag down?'

A supporter of former President Donald Trump was caught on camera hurling homophobic slurs at his gay neighbor for flying a flag that says “Trump Lost LOL.”

Michael Challans, a 43-year-old resident of Helena, Montana, was cited by local police Tuesday after they received a complaint that he had used “loud, profane, and offensive language” in a dispute with his neighbor on March 1, the Helena Independent Record reports.

The recipient of the verbal harassment, 36-year-old Tim Mielke, captured the incident on his doorbell security camera and posted it on Facebook. The footage has since earned more than 4,000 upvotes on Reddit’s r/PublicFreakout page and been shared by several prominent Twitter users, including @davenewworld_2.

“When you take yours down,” Mielke replies.

“Fucking queer. You’re in the wrong neighborhood,” Challans says. “How about you go over to a fucking Biden neighborhood?”

“Of course someone like you would say that,” Challans replies. “That’s what all you fucking f*gs say.”

Challans demands to know what the point of Mielke’s “Trump Lost LOL” flag is. Mielke gestures around the neighborhood , which reportedly contains more than half a dozen Trump flags, and asks, “What’s the point of these?”

“He’s a real American,” Challans says. “What are you? What do you stand for?”

Mielke tells Challans to “enjoy your evening” and enters his house. The video ends with Challans calling Mielke a “fucking pussy.”

Challans told the Helena Independent Record that he and Mielke live in “a Trump neighborhood” and accused Mielke of flying his flag “just to stir up problems.” Despite his gratuitous use of homophobic epithets in the video, Challans also insisted he has “no problems with gay people.”

Challans added: “I wasn’t even yelling, but was talking loud enough for him to hear me. How could anyone possibly get a ticket for using words?”