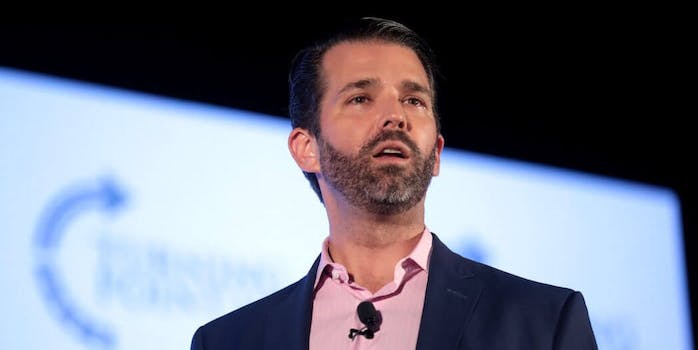 Yesterday, President Donald Trump was impeached by the House of Representatives. Since then, he’s ramped up the never-ending Twitter tirade, and implied that the late John Dingell, a WWII veteran and longest-serving member of Congress, is in hell.

As per usual, Donald Trump Jr. has spent his Twitter time rallying behind his father, even tweeting a not-at-all sad image of his dad’s face photoshopped over Santa Claus.

Meanwhile, some enterprising soul dug up an old Trump Jr. tweet that takes on a distinctly different light given his father’s impeachment.

The night before, then-presidential candidate Hillary Clinton had said at a campaign event that half of Trump supporters were “a basket of deplorables,” a comment she later walked back amid social media backlash.

The resurfaced tweet poking fun at her comment and Bill Clinton’s impeachment spread much laughter, memes, and good tidings.

You know what else sucks? Being incarcerated in Clinton Correctional Facility.

What color is that shirt?

Now that the president has been impeached, the next phase is a trial in the Senate. If the Senate convicts, Trump will be removed from office.

House Majority Leader Nancy Pelosi (D-Calif.) is reportedly waiting for Senate Majority Leader Mitch McConnell (R-Ky.) to establish trial rules before she’ll send articles of impeachment to the Senate. There are some indications of a standoff beginning between them.

Time will tell whether Trump will become the first president convicted in the Senate, and, if so, whether his eldest son and namesake has an old tweet for that.