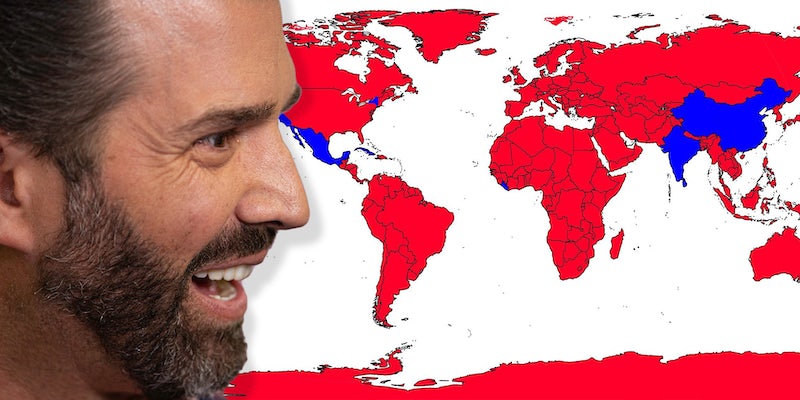 It’s Election Day, finally, and everyone has thoughts! After two years of primaries and campaigning, President Donald Trump squares off against Vice President Joe Biden. Will Trump squeak out a victory like last time? Will Biden win in a resounding rebuke of the past four years? Nobody knows!

But Donald Trump Jr. has offered his prediction.

In it, California and New York go blue, the rest red, a 454-84 victory. While that won’t happen, the rest of the map is what surprised people.

Antarctica, where the only residents are scientists, somehow broke for Trump. As did all of Western Europe, which seems to despise the current president. And yet, India, which adores Trump and has its own burgeoning ethno-nationalist movement, picked Biden?

And everyone wanted to know why one country in Africa, Liberia, is blue.

That confusion with the all-over-the-place map though was quickly resolved when it was revealed Trump Jr. plucked the map straight from a Trump troll.

As to why Liberia was blue, the best guess is the person who made it thought it meant “Liberal.”

Although the maker of the map did admit that after hearing some criticism, he was wrong about India.

As for the rest? We will find out tonight.