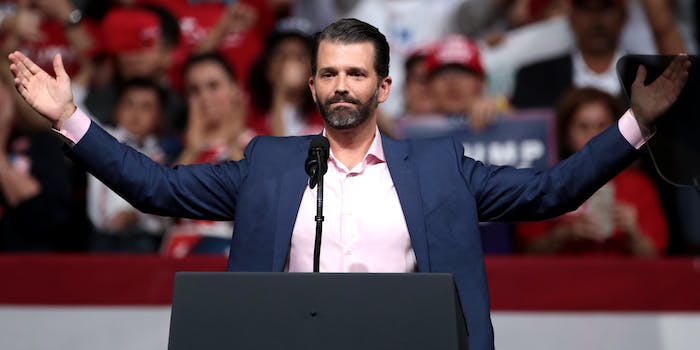 Trump Jr. wants to be injected with his dad’s blood

Conservatives are salivating at the idea of forcing people to inject Trump's plasma.

Donald Trump Jr. spent Monday evening fantasizing about his daddy’s blood and it being injecting into others as a coronavirus treatment.

In a post on Instagram, the young Trump, who definitely wants daddy’s blood inside him, posted a meme about liberals being forced to accept the president’s plasma.

“Imagine this. Trump gets all better and donates his plasma to develop a corona treatment,” the meme says. “And then all the liberals have to get vaccinated with Trump’s blood.”

In a caption on the photo, Trump Jr. excitedly suggests that Trump must offer up his blood immediately.

Many suggested that Trump Jr.’s post was yet another example of his family’s creepy dynamic.

“Some day we’ll unravel the weird psychodrama going on between junior and his dad or we won’t,” @MollyJongFast said.

It appears the president’s supporters are fantasizing about the prospect as well.

In scores of social media posts, Trump fans salivated at the idea of forcing the president’s blood into the bodies of liberals.

“Trump’s blood will be the cure of the only vaccine that cures everyone of coronavirus,” @SirajAHashmi said.

Even Ben Shapiro was hot for it.

Patients who have recovered from the coronavirus can donate blood in order to aid in the treatment of those still suffering from the disease. Blood from recovered patients contains antibodies that in some cases can help speed up the recovery process.

The bloodlust from conservatives comes just hours after Trump returned to the White House following his stay at the Walter Reed Medical Center for coronavirus treatment.

Despite attempting to reassure the public that he feels better than he has in 20 years, Trump looked as if he was struggling to breath upon his return.

The president’s “experimental treatment,” which included a cocktail of drugs such as the steroid dexamethasone, led many to speculate that Trump was either experiencing some form of mania or “roid rage.”

The blood campaign is especially odd given that many of Trump’s supporters seem to reject the science of vaccines and believe that Democrats drink blood as part of the QAnon conspiracy.