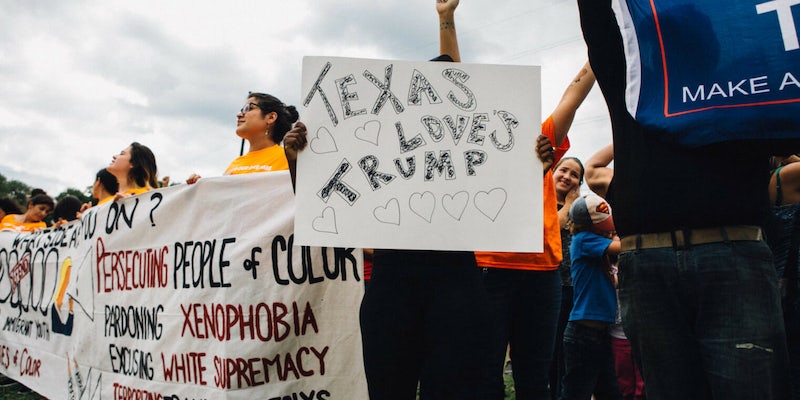 POTUS makes a noisy landing in the Lone Star State amid flood fallout.

President Donald Trump visited southern Texas on Tuesday to survey the damage and flooding that has rocked the state since Hurricane Harvey plowed through the region.

Trump made several stops during his daylong tour of the state and made some curious comments. The internet already pointed out that Trump’s old tweets criticizing former President Barack Obama‘s response to Superstorm Sandy seem hypocritical now that he’s doing the exact same thing.

Here are some of the more bizarre things that happened during his trip to Texas.

1) Trump admired the turnout… with a Texas flag

Trump is known to have an obsession with the size of crowds that come to see him at rallies, speeches, or other events. Tuesday was no different.

While speaking to a crowd, Trump climbed onto a ladder of a firetruck and waved a Texas flag to those that gathered to see him speak outside of a firehouse in Corpus Christi. As he was speaking, the president marveled at the “turnout” of people who came to see him speak.

“Thank you everybody, what a crowd, what a turnout,” he said, later complimenting the job done by the state’s lawmakers in the face of the natural disaster.

Trump speaking in Corpus Christi, Texas: "Thank you everybody — what a crowd, what a turnout…This is historic, it's epic." pic.twitter.com/kZvVpORn4E

In the same speech Trump had some unique words to describe what happened in Texas following Harvey’s destructive few days. At least 40 inches of rain were dumped across the southern part of the state, and 130 mph winds blasted through towns and cities. At least 14 people were killed as a result of the storm.

The rainfall is believed to be the most from a tropical storm or hurricane in history for the contiguous 48 states.

“I will tell you, this is historic, it’s epic what happened, but you know what it happened in Texas and Texas can handle anything,” Trump said during his first speech.

Speaking with state and local officials in Texas, Trump wanted to thank the efforts of lawmakers and first responders, but stopped short of offering congratulations.

Pres. Trump with Gov. Abbott: "We won't say congratulations…we'll congratulate each other when it's all finished" https://t.co/VxCAPyqH96 pic.twitter.com/O2xMQaGXml

4) Trump popped into Austin amid protesters

In Austin, Trump took to an emergency underground command center with Texas officials. Several groups of protesters gathered nearby chanting “Donald Trump has got to go” and “No Trump, mo KKK, no racist U.S.A.”

Some supported Trump, while others made apolitical signs. One area man made a joke about injured NFL quarterback Andrew Luck for some reason. 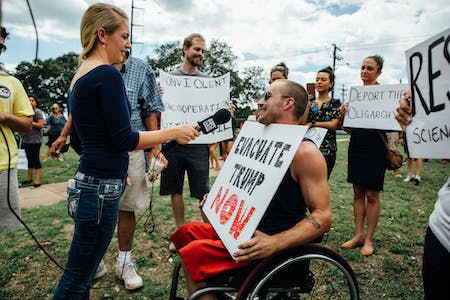 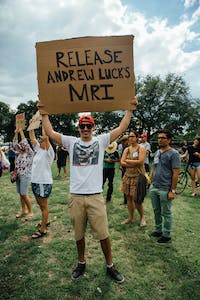 “Brock has just been incredible,” Trump said in Austin during a briefing about FEMA Administrator Brock Long. “The job… has been really incredible and everyone’s talking about it.”

6) Trump joked about the name ‘Harvey’

“Sounds like such an innocent name, Ben,” Trump said to Secretary of Housing and Urban Development Ben Carson, in reference to the name “Harvey.”

7) Trump admitted it’d be a long, federal fight in Houston

Despite the optimistic tone, Trump admitted that it’d be a “long term” situation in Houston. He’s reportedly slated to return to Texas on Saturday. The admission is only bizarre because it seemed to be a surprisingly humbling moment for the president.