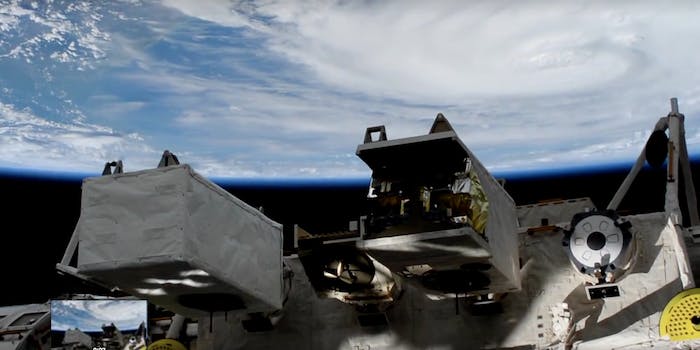 Time-lapse video shows what Hurricane Harvey looks like from space

Hurricane Harvey is already shaping up to be a terrifying storm for residents along the Gulf Coast in Texas and Louisiana, and it’s no less daunting when viewed from space.

The International Space Station shared time-lapse video of its flight over the eye of the category 2 hurricane Friday morning, illustrating the massive size of the storm system.

According to the National Weather Service, Harvey will make landfall along the Texas coast late Friday night or early Saturday morning, bringing with it 110 mph sustained winds and even more intense gusts. Forecasters are especially worried about storm models showing Harvey strengthening before landfall, and then slowing to a hover along the coast for several days. This could result in massive rainfall totals—15 to 25 inches along the coast, with up to 35 inches of rain in isolated areas—through Wednesday. By comparison, Seattle averages about 37 total inches of rainfall per year.

“Harvey is expected to be a major hurricane when it makes landfall tonight, bringing life-threatening storm surge, rainfall, and wind hazards to portions of the Texas coast,” said NWS in a statement. “Rainfall of this magnitude will cause catastrophic and life-threatening flooding.”

Tropical-storm-force winds are expected to reach up to 140 miles inland, with rainfall totals of five to 15 inches through central Texas and into southwest and central Louisiana. Texas has already declared a state of emergency for 30 counties ahead of the storm, and evacuation orders have been issued for many coastal communities, including areas around Corpus Christi, Houston, and Galveston.