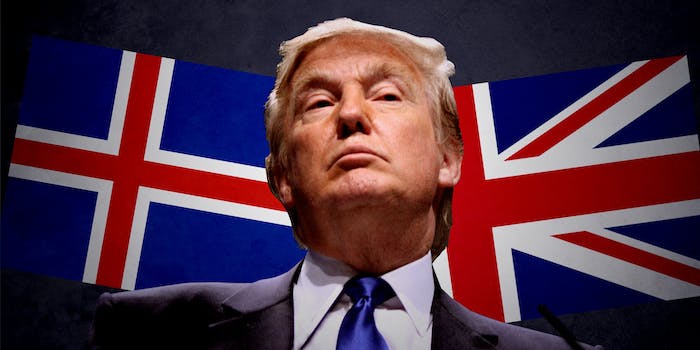 Politicians in the U.K., Australia, and Iceland say they're being 'spammed' by Donald Trump.

The fundraising emails, which appeared to be written by Trump himself, were received by members of the United Kingdom, Australian, and Icelandic parliaments last week. Another email, dated June 22, was purportedly written by his son, Donald Trump Jr.

Foreign nationals are prohibited from making contributions in connection with any election under federal law. It is unknown at this time whether the Trump campaign has actually received any funds as a result of the emails.

“There isn’t enough information to say whether these foreign solicitations were intentional or the result of incompetence,” said Brendan Fischer, an associate counsel at the Campaign Legal Center, “but available evidence indicates that the Trump campaign didn’t conduct the minimal diligence required despite red flags that Trump was asking foreign nationals for money.”

Federal law prohibits candidates from “knowingly” soliciting foreign donations, and for that Trump, or at least his staff, would have to be “aware of facts that would lead a reasonable person to inquire whether the source of the funds solicited, accepted or received is a foreign national, but the person failed to conduct a reasonable inquiry.”

In Scotland, where members of Parliament say they’ve been “spammed” with emails by Trump requesting money, MP Natalie McGarry of Glasgow East had choice words for the Republican frontrunner.

“Quite why you think it appropriate to write emails to U.K. parliamentarians with a begging bowl for your father’s repugnant campaign is completely beyond me,” McGarry wrote to Trump Jr., in an email reply widely reported on by the Scottish press.

“The U.S. elections are a matter for the American people,” added McGarry, “but I do send my warm hope that they reject your father fundamentally at the ballot box.”

Three prominent Icelandic politicians have come forward after emails from Trump in which he pledged to personally match any donations they made. Katrín Jakobsdóttir, head of the Left Green Party, said the letter, in which Trump bashed “Crooked Hillary” her “pathetic cronies” and the “dishonest liberal media,” had left her speechless.

Australian MP Tim Watts of Gillibrand said on Twitter that he believes every member of his country’s Parliament was solicited for money to back Trump’s bid for the White House. “Even the left wing ones,” he wrote, followed by “#ImWithHer,” an expression of support for Hillary Clinton, the presumptive Democratic nominee.

The most recent fundraising report revealed the Trump campaign was falling far behind Clinton in the money game. In May, Clinton raised roughly $26.4 million for her campaign, leaving her with $42.5 million cash on hand, while Trump raised $3.1 million and was left with only $1.3 million.

Trump previously deflected criticisms of his fundraising efforts, casting his campaign as “leaner and more efficient,” saying the “positive response” he received was indicative of a electorate that “does not want yet another corrupt politician like Crooked Hillary.” Corey Lewandowski, Trump campaign manager throughout 2016, was subsequently fired.

The following day, Trump’s campaign claimed to have raised at least $11 million in 24 hours.