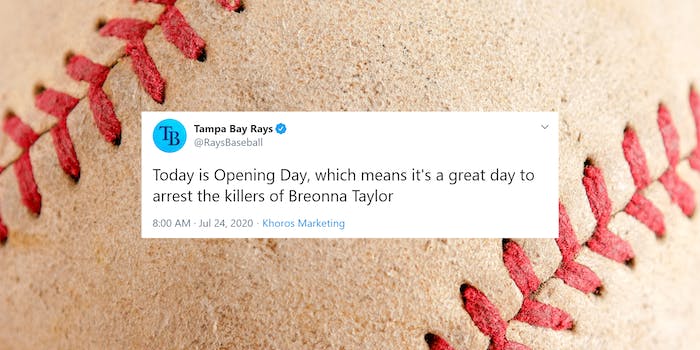 The tweet has been well-received by a number of people online.

The Tampa Bay Rays marked the opening of its MLB season on Friday by making a call for justice for Breonna Taylor.

Taylor was shot and killed by police in Louisville, Kentucky in March. Her death, along with George Floyd—who was also killed by police—has been at the center of Black Lives Matter protests against police brutality and racism throughout the country.

Unlike the the officer who knelt on Floyd’s neck causing his death, the officers in Kentucky have not been charged.

“Today is Opening Day, which means it’s a great day to arrest the killers of Breonna Taylor,” the Tampa Bay Rays’ official account tweeted on Friday.

The tweet has been well-received by a number of people online.

A “great day to arrest the killers of Breonna Taylor” has become a rallying cry online and a bit of a meme that, although it has raised awareness, has also faced some backlash.

In a follow-up tweet, the team announced it was donating $100,000 to several organizations, including an NAACP chapter in Florida, and linked to a social justice guide the team had compiled.

While the MLB’s coronavirus-shortened season started on Thursday night, most teams will play their first game today—including the Rays.

On Thursday, players on the Washington Nationals and New York Yankees kneeled during a pregame ceremony for Black Lives Matter. The teams also wore a “BLM” patch on their jerseys and “BLM” was written behind the pitcher’s mound.

Players for the San Francisco Giants and Los Angeles Dodgers did the same during a later game.