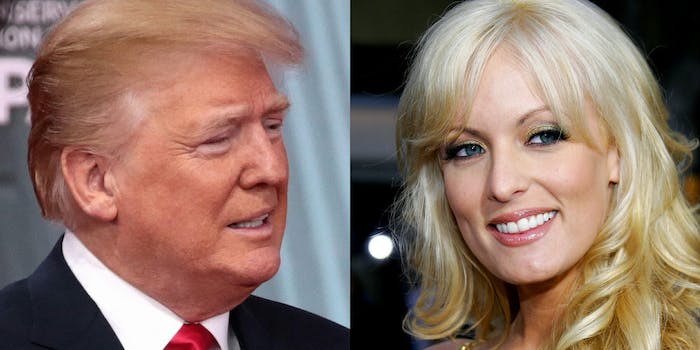 Report: Trump may have to acknowledge Stormy Daniels payments

Things could get stormy for the president.

President Donald Trump may have to acknowledge payments to his personal lawyer Michael Cohen that were made in exchange for him paying adult film actress Stormy Daniels to keep quiet about an alleged affair, according to a new report.

Tuesday is the deadline for Trump to file a financial disclosure form with the Office of Government Ethics, Time Magazine reports, where he may have to disclose reimbursement payments he made to Cohen after he paid $130,000 to Daniels to not talk about the affair ahead of the 2016 election.

Rudy Giuliani, a new appointment to Trump’s legal team, recently contradicted past statements by Trump when he told Fox News host Sean Hannity that Trump “repaid” his long-time personal lawyer the $130,000 that was paid to Daniels.

Those repayments, experts told Time, would have to be included on a financial disclosure forum submitted to the Office of Government Ethics, since they exceed $10,000 from the previous calendar year.

The president also confirmed, in a tweet, that the payments to Cohen were part of a “retainer.”

“We know now based on the statements by the President’s own surrogates that there was this debt incurred in 2016, and still existed into—which is the relevant piece from this report. And it wasn’t disclosed last year, even though by all appearances it should have been,” Adav Noti, senior director for the Campaign Legal Center, told the magazine.

You can read all of Time Magazine‘s report here.