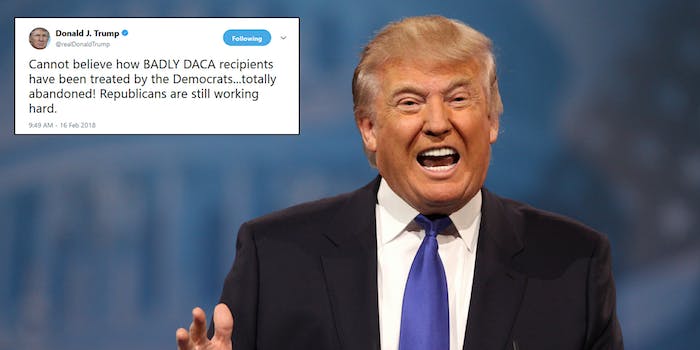 He glossed over the fact that his administration ended the program.

President Donald Trump tweeted on Friday that Democrats have treated recipients of the Deferred Action for Childhood Arrivals (DACA) program “badly,” glossing over the fact that his administration rescinded the program last year.

Trump appeared to be trying to cast blame on Democrats for several failed immigration bills that did not garner enough votes to pass on Thursday. One bill would have provided a pathway for citizenship for DACA recipients, known as Dreamers, and funneled approximately $25 billion into border security funding. The bill, which needed 60 votes to pass, died after a 54-45 vote.

The president instead backed a bill introduced by Sen. Chuck Grassley (R-Iowa) that was more in line with his preferred immigration changes. That bill also died in the Senate, with a final vote of 39-60.

“Cannot believe how BADLY DACA recipients have been treated by the Democrats…totally abandoned! Republicans are still working hard,” Trump tweeted.

Cannot believe how BADLY DACA recipients have been treated by the Democrats…totally abandoned! Republicans are still working hard.

Trump casting blame on Democrats for treating Dreamers “badly” does not take into account the fact that his administration rescinded the DACA program in the first place. By having Attorney General Jeff Sessions announce that the program was being eliminated, the Trump administration punted the DACA decision to Congress.

DACA, enacted in 2012 under President Barack Obama, shields children brought to the United States by their parents as undocumented immigrants from deportation.

However, instead of backing the bipartisan bill that died on Thursday, Trump threatened to veto it because it did not include what he sees as important immigration reform.

The program has been at the center of legal battles and at the forefront of Democrats’ arguments over spending bills in recent months.

While Trump may think Democrats have treated Dreamers “badly,” actions by some lawmakers are quite the opposite.

House Minority Leader Nancy Pelosi (D-Calif.) spoke for more than eight hours on the House floor earlier this month in defense of Dreamers, telling personal stories in protest of a spending bill that did not deal with immigration.