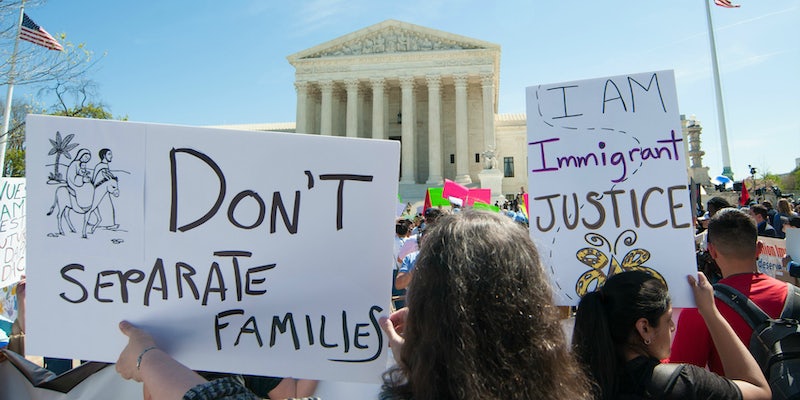 Trump tweets derailed a bipartisan deal to protect Dreamers and build the wall.

A bipartisan bill to protect Dreamers and fund the border wall died 54-45 in the Senate on Thursday.

The deal was struck after months of negotiations and would have provided a pathway to citizenship for undocumented immigrants along with $25 billion in border security funding.

The bill, which needed 60 votes to pass the Senate, was derailed by veto threats from the White House. President Donald Trump tweeted Thursday that the bill, introduced by Sen. Mike Rounds (R-S.D.) and Sen. Angus King (I-Maine), would be “a total catastrophe.”

The Schumer-Rounds-Collins immigration bill would be a total catastrophe. @DHSgov says it would be “the end of immigration enforcement in America.” It creates a giant amnesty (including for dangerous criminals), doesn’t build the wall, expands chain migration, keeps the visa…

Trump’s efforts to sink the bill were surprising, given his promise in January that if Congress could reach a bipartisan deal on immigration, he would sign it into law. The bill was considered the most likely to pass the Senate.

Trump backed a competing bill introduced on Monday by Sen. Chuck Grassley (R-Iowa), which includes funding for border security and a path to citizenship for the 1.8 million young people, known as Dreamers, brought to the U.S. as children under the Deferred Action for Childhood Arrivals (DACA) program. However, the Grassley bill places severe restrictions on family-based migration, which the president refers to as “chain migration.”

While the Grassley bill has the support of the White House and the Department of Homeland security, it’s unpopular among Democrats due to the limits on family-based migration and increased crackdowns on visa overstays and immigrants who re-enter the country illegally after being deported.

That bill died in the Senate Thursday afternoon, too, with a final vote of 39-60.

Senate Democrats faced backlash from their own party after caving on a January bill to fund the government without guaranteeing protections for Dreamers. Last week, Rep. Nancy Pelosi spoke in front of the House for eight hours and seven minutes in passionate defense of Dreamers, ending just hours before a stopgap measure to fund the government through Feb. 8 would have expired.

After a number of proposed measures and months of debate, Congress is running out of time and options to pass a bill that will provide both increased security for the southern border and enshrined protections and a path to citizenship for DACA recipients.

While DACA was set to expire on March 5 following an announcement from Trump in September of last year, two federal judges have moved to block the order, stating that the Trump White House’s characterization of DACA as unconstitutional is flawed and that the government is required to continue processing renewal requests for immigrants enrolled in DACA.

Even with this new development, the fate of undocumented immigrants in the U.S. is still in the balance.

Sen. Bob Corker, who voted against the measure, has proposed tacking an immigration debate onto a bill to fund the government, which Congress must pass by March 23 to avoid another shutdown.