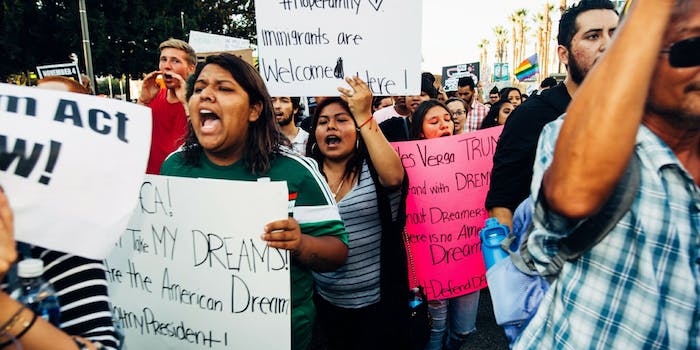 A federal judge in New York ruled on Tuesday that the Trump administration must continue processing renewal applications for the Deferred Action for Childhood Arrivals (DACA) program, despite the Justice Department’s plan to end it in March.

The ruling, issued by U.S. District Judge Nicholas Garaufis in Brooklyn, stated that the reasoning behind Trump’s rescinding of DACA in September—that former President Barack Obama had issued it “unconstitutionally“—was flawed, and that the administration was “erroneous” to assume that of the program, NPR reported.

Garaufis said the move to end DACA, which allows nearly 700,000 young immigrants to legally work in the U.S., violated the Administrative Procedures and Immigration and Nationality acts. As a result, the judge ordered the administration to continue processing DACA renewal applications from pre-existing DACA holders.

“Defendants thus must continue processing both initial DACA applications and DACA renewal requests under the same terms and conditions that applied before September 5, 2017, subject to the limitations described below,” Garaufis wrote.

In response, the Justice Department filed a petition for the U.S. Supreme Court to directly review the constitutionality of the program as well as the injunction, which it has yet to do. The Supreme Court typically doesn’t grant cases that haven’t gone through a full appeals process.

A Justice Department spokesperson maintained that the administration says DACA’s implementation was an “unlawful circumvention of Congress,” and that the courts will eventually vindicate the administration’s ending of the program. Congress is still working to pass legislation to give DACA holders and other undocumented childhood arrivals a path to naturalized citizenship, ostensibly under the DREAM Act.