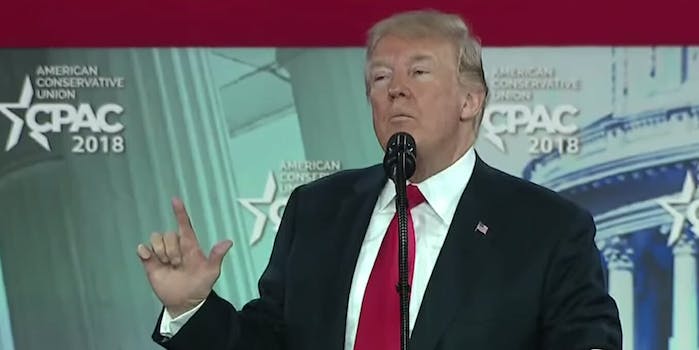 It was like stepping back in time and listening to a Trump campaign rally.

President Donald Trump addressed the Conservative Political Action Conference (CPAC) on Friday–but it sounded more like a 2016 campaign rally as Republicans gear up for what is expected to be a close 2018 midterm election.

Trump’s CPAC speech on Friday had all the hallmarks of a 2016 presidential campaign rally. There were “build that wall” and “lock her up” chants, he bashed immigration policies, he mocked a protester, ad-libbed lines, and even read the “Snake song” a poem about immigration was a fixture on the campaign trail.

It was like stepping back in time to a Trump rally two years ago. It was also Trump’s first stump speech for Republicans heading into the midterms later this year.

Near the beginning of Trump’s speech, which went well over the time CPAC allotted for him, the president tried to explain why the sitting president’s party typically loses seats in Congress during midterm elections.

“I know that whoever wins the presidency has a disadvantage, for whatever reason, in the midterms,” Trump said, waving his arms. “You know what happens, I’m trying to figure it out, because historically if you win the presidency, you don’t do well two years later. And you know what, we can’t let that happen. I know what happens—they finally figured it out—nobody’s been able to explain it. It just happens.”

"We have a very crooked media. We had a crooked candidate too, by the way," President Trump says; CPAC crowd responds with chants of "lock her up" https://t.co/LfZRkoMely pic.twitter.com/Xca5Os7kUv

In order to rile up the conservative crowd, Trump reached back into his 2016 campaign pocket numerous times to ignite a spark of “enthusiasm” among Republicans to stave off a wave of Democrats being elected later this year.

Here are just a few examples of the classic-2016 rhetoric Trump used during his CPAC speech to fire up the crowd:

Trump is keenly aware of the polls that show Democrats ahead in generic congressional ballots, and knowing a Democratic wave in the Senate and House of Representatives would derail his agenda for the two remaining years, he’s going back to the playbook that worked so unexpectedly once before.

What’s not clear is if that same old message is the right play for a country roiling from his presidency.