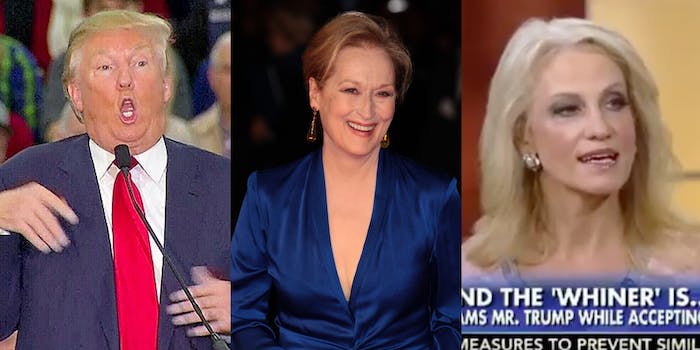 Donald Trump‘s team went on the attack against Meryl Streep on Monday morning after the actress condemned the president-elect in a speech at the Golden Globes on Sunday night.

As Trump tweeted that Streep was “one of the most overrated actresses in Hollywood” and a “flunky” for Trump’s former Democratic opponent, Hillary Clinton, his incoming White House advisor and spokeswoman, Kellyanne Conway, condemned the actress on Fox News.

“We have to now form a government and I’m concerned that somebody with a platform like Meryl Streep is also I think inciting people’s worst instincts when she won’t get up there and say ‘I didn’t like it but let’s try to support him and see where we can find some common ground with him,’” Conway said on Fox & Friends.

.@KellyannePolls: I'm concerned that somebody with a platform like Meryl Streep's is inciting people's worst instincts pic.twitter.com/QjITaedKnV

Without mentioning Trump by name, Streep condemned Trump during her acceptance speech for the Cecil B. DeMille Award for appearing to mock a disabled reporter at a November 2015 rally and called on those listening to embrace empathy in the face of Trump’s divisive presidency.

“It was that moment, when the person asking to sit in the most respected seat in our country imitated a disabled reporter—someone he out-ranked in privilege, power, and the capacity to fight back,” Streep said. “It kind of broke my heart when I saw it, and I still can’t get it out of my head because it wasn’t in a movie; it was in real life.”

Streep also urged the audience to support journalists, whom Trump has consistently portrayed as “dishonest” throughout his campaign and his time as president-elect. “We need the principled press to hold power to account, to call them on the carpet for every outrage. That’s why our founders enshrined the press and its freedoms in our constitution,” Streep said.

Trump mimicked New York Times journalist Serge Kovaleski, who has a chronic condition that affects movement in his joints, at a Nov. 24, 2015, campaign rally in South Carolina after the reporter challenged Trump’s claim that “thousands” of Muslims had cheered the collapse of the World Trade Center after the Sept. 11, 2001, terrorist attacks. Trump had cited a report by Kovaleski in the Washington Post that noted “a number of people who were allegedly seen celebrating the attacks.”

After Trump faced backlash for his impression of Kovaleski, he claimed in a statement that he did not know him and was not aware of his disability.

“I have no idea who this reporter, Serge Kovaleski is, what he looks like or his level of intelligence,” Trump said. “I don’t know if he is J.J. Watt or Muhammad Ali in his prime—or somebody of less athletic or physical ability. If Mr. Kovaleski is handicapped, I would not know because I do not know what he looks like.”

On Monday, Trump reiterated his claim that he was not mocking Kovaleski while admonishing Streep.

Hillary flunky who lost big. For the 100th time, I never "mocked" a disabled reporter (would never do that) but simply showed him…….

"groveling" when he totally changed a 16 year old story that he had written in order to make me look bad. Just more very dishonest media!

Streep also noted that much of the entertainment industry is made up of people who hail from outside of Hollywood, an allusion to Trump’s stance on immigration. “Hollywood is crawling with outsiders and foreigners,” Streep said. “If you kick ’em all out, you’ll have nothing to watch but football and mixed martial arts, which are not the arts.”

Trump supporters on Twitter largely condemned Streep as a member of the “Hollywood elite,” while critics of the president-elect noted that he rose to fame in much of the U.S. as the host of a reality TV show.