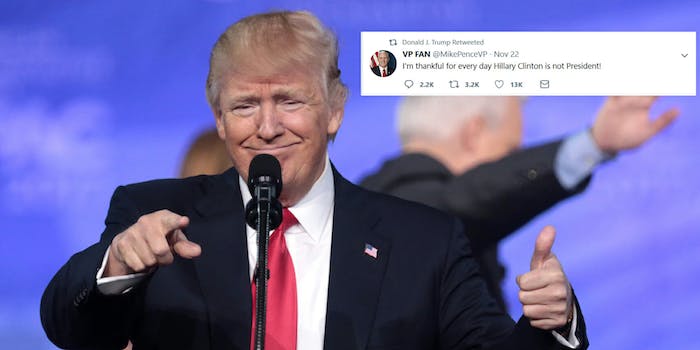 President Donald Trump has been in the Oval Office for nearly two years, but he can’t seem to resist attacking Hillary Clinton, his former presidential election opponent, on Twitter.

The president went on a retweet spree on Wednesday morning—including posting a meme from a Trump fan account that showed many of his political rivals (and current deputy attorney general) in jail. But most of them were about a month-old story about Clinton.

The president retweeted right-wing personalities Charlie Kirk and Dan Bongino, who criticized Clinton about a joke she made during an interview, when an interviewer mixed up former Attorney General Eric Holder and Sen. Cory Booker (D-N.J.).

Clinton joked with the interviewer after their mistake by saying, “I know they all look alike,” in what appeared to be a jab at the interviewer. Both Kirk and Bongino criticized the remark a month ago, but the tweets were resurfaced by the president on Wednesday morning.

WOW – if a conservative said this they would be boycotted and not allowed back in the public arena — Hillary said “all black people look the same” – incredibly racist thing to say Hillary!

The president also retweeted a fake Vice President Mike Pence “fan” account who, on Thanksgiving, said he was thankful Clinton was not president.

“I’m thankful for every day Hillary Clinton is not President!” the account wrote, apparently to the liking of the president.