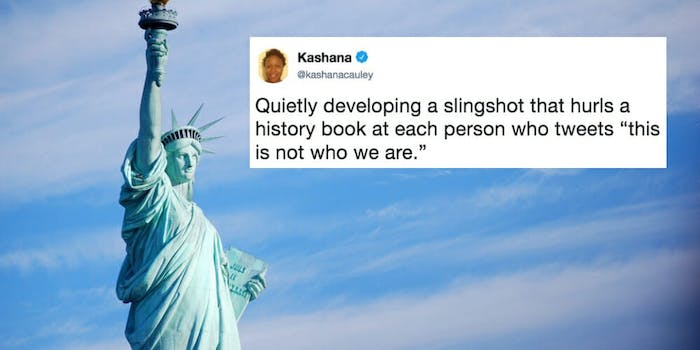 Care to share what America you've been living in where this *doesn't* happen?

On Sunday, United States border agents tear-gassed and shot rubber bullets at migrants attempting to cross into the country at the San Ysidro port of entry. The gas also affected protesters who had come to the border with signs begging for President Donald Trump to allow them to ask for asylum, including families and small children who were photographed running and crying following the confrontation.

What happened was horrific, and it was another example of the ways that the U.S. uses armed forces to brutalize vulnerable communities.

However, for some people, this wasn’t another example. It was an anomaly, a show of how “we,” America, “are not.” For these people, the photos somehow illustrated an America that hasn’t existed for centuries.

“This is not America,” some tweeted.

“This is not who we are,” many refrained.

I can’t get this image out of my mind. Yes, we have a right and duty to secure our borders. But shooting tear-gas at innocent children cannot be the way to do it. The world is watching. This is not who we are, America. pic.twitter.com/sC5ufYtUqb

“This is not America” is a very well-intentioned (and poorly thought-out) framing of the kind of non-stop horror show that Democrats and liberals have understood the Trump administration to be—the pre-Trump “good America” vs. “the white-supremacist dog-whistling” current America. Any time another class of people, be they transgender or immigrants, are denied basic humanity, people respond, “This is not who we are.”

For example, when President Donald Trump called for a total ban of Muslims as a presidential candidate, then followed through with a majority-Muslim country travel ban, and when he called for a ban of transgender people from serving in the military, and when he called for the end of the Deferred Action for Childhood Arrivals program allowing certain undocumented youth to work in the U.S. without deportation, people responded, “This is not who we are.”

I come from a family of journalists, I’m the 6th generation of a family owned newspaper. To have the President of United States condone a governments execution of a journalist for an unfavorable story is chilling beyond compare. This is not safe, not American & not who we are.

Border Patrol firing tear gas on asylum seekers, including kids, at the border. This is not America.

This weekend, at America’s doorstep, barefoot children in diapers were dragged away choking and wheezing by their mothers as tear gas rained down from helicopters emblazoned with the seal of the United States of America.

Seeking asylum is a HUMAN RIGHT. This is not who we are. https://t.co/QgBbHNjfMi

The thing is, gassing children—who aren’t even on U.S. soil, who haven’t committed a crime, and whose families rightfully want to apply for asylum—isn’t not who the United States is. It’s totally emblematic of the country’s values, of who it deems deserving of resources and dignity and humanity, just as Trump’s systematic child separation policy was indicative of who America is and reminded us we were earlier this year.

Historically, America has always shown itself to be the kind of country that values whiteness, men, Christianity, among the other kids of hegemony it was founded upon. “This” was who America was when it codified racism during the Jim Crow era, or when it required Native American children be enrolled in boarding schools to enforce assimilation, or when it required Japanese people to live in internment camps, or when it allowed women and people of color to be sterilized without their consent, taking away their ability to carry on their lineage.

Time and again, America has shown the people not traditionally accepted by America who America really is, and these are only a few of the many extreme examples of how America has done so.

So easy to see why the phrase “This is not who we are,” has basically been turned into a meme, laughing at the ways in which starry-eyed liberals appear to be ignoring the human rights violations that show this is exactly who America is, and has always been.

Quietly developing a slingshot that hurls a history book at each person who tweets “this is not who we are.”

Even the most white-washed, sanitized of public school history textbooks in the most revisionist history-parading states in the country touch on American slavery, the mistreatment of Native Americans, and Japanese internment. It doesn’t take but a Google search to find just how the United States continues to hurt vulnerable communities today. There’s no reason any empathetic Twitter personality should be tweeting, “This is not who we are,” because the available historical evidence that contradicts such a statement is overwhelming.

Which is why the meme, while underutilized and perhaps short-lived, is so cutting. It’s not uniform, taking on various other preexisting memes to fit its own agenda.

for real though. whenever americans are like "this is not america!" i as a european just look from the sidelines like pic.twitter.com/QAxCpdJcSO

Americans: THIS IS NOT WHO WE ARE!

THis iS nOt wHo wE ARe pic.twitter.com/7Jse9yOLY7

every time i read some milquetoast democrat tweet saying "this is not who we are" but it is, in fact, exactly who we are pic.twitter.com/lGz3Qmmrkv

These memes are vicious in their attacks of the ignorant, or even worse, the privileged, who, despite having access to the truth, would rather tweet a solidarity-adjacent rallying cry than take a hard look in the mirror and admit that, yes, the U.S. is a really fucked-up country and needs to stop pretending it’s never stooped so low as it has in recent history.

Other call-outs of these tweets, while not memes, give more context to the history that people who think “this is not who we are” seem to be missing. Some of them share photos of public servants hosing down Black people in the streets. One post shows the state police-led shooting of unarmed students at Kent State University, while another shows police pepper-spraying peaceful protesters at the University of California, and armed forces shooting rubber bullets at North Dakota Pipeline protesters on the Standing Rock reservation.

Them: I can't believe they used tear gas on kids. This is not who we are.

An introductory visual primer for those who claim, "This is not who we are." pic.twitter.com/iEppcjm5z7

All the "this is not who we are" people need to pay attention. Shamefully, this IS who "we" are.#TijuanaBorder #StandingRock #MuslimBan pic.twitter.com/6QFGv8ZWcu

And others have instead taken the time to explain on Twitter why it is that the phrase “this is not who we are” is a detriment to any kind of effort to educate people about and organize against atrocities like the confrontation at San Ysidro.

Every time I hear someone say, “This is not America” I feel a profound sense of failure as an educator. It’s a reminder how so much of our current situation has been facilitated by a miseducation system. It’s completely deliberate

And now y’all are SO shocked that it seemed to have “come from no where” and y’all are STILL screaming stupid shit like “this is not who we are” even though there’s not been one era in this country that says otherwise.

Y’all are STILL trying to pacify yourselves

Looking at all these “This is not America” tweets like did y’all miss the part about the genocide of Natives, residential schools, chattel slavery, racial segregation, Japanese internment camps, Standing Rock… I could go on…

Liberalism means saying "[Atrocity X] is not what America is about, this is not who we are" about something that is exactly what America has always been about

No more “This is not who we are” tweets. This is who we are. Let’s change it. pic.twitter.com/K7fuXSB06X

The Politifact Lie of the Year *should* be, "This is not who we are."

A divide I see on my feeds: White people saying, “This is not America! This is un-American!” and PoC saying, “This is the America we’ve always known.” We agree this isn’t the America many of us want. But we can’t get there without acknowledging what has been and what still is.

“No more ‘This is not who we are’ tweets,” Moms Demand Action founder Shannon Watts tweeted. “This is who we are. Let’s change it.”