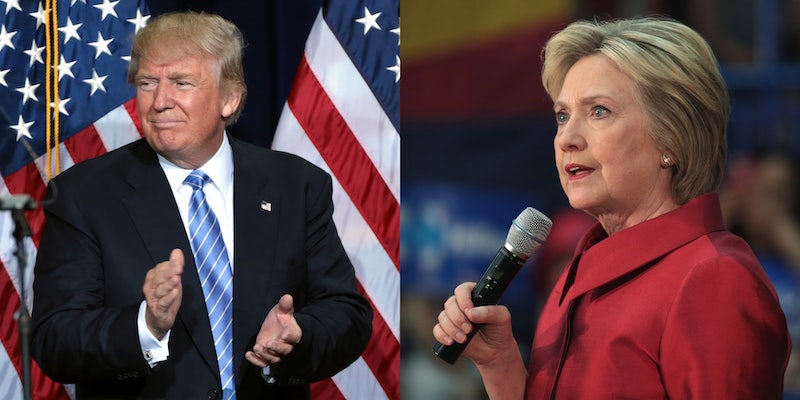 Trump leads by 2 in new poll, but Clinton maintains path to victory

Here's where the 2016 presidential election stands one day after Labor Day.

Just 62 days sit between now and Election Day, and the race between Republican Donald Trump and Democrat Hillary Clinton is turning into a nail-biter.

At least, that’s how the landscape looks one day after Labor Day, according to a trio of national polls.

Trump leads Clinton by two points (45 percent to 43 percent) among likely voters in a new national CNN/ORC poll conducted in the first four days of September. With a margin of error of plus or minus 3.5 points, this survey puts the leading candidates in a virtual tie. Libertarian candidate Gary Johnson continues his steady support at 7 percent, while Green Party nominee Jill Stein sits at 2 percent support.

The CNN/ORC poll follows a Rasmussen poll conducted the last week of August that shows Trump ahead by one point among likely voters, which is also within the margin of error. An IBD/TIPP poll, meanwhile, shows Trump and Clinton tied.

That’s all bad news for Clinton, who consistently led Trump by high single-digit margins in all polls leading up to the end of August. But reasons remain for the Clinton campaign to stay positive—just not as many reasons as last week.

Clinton still has an average lead of 2.4 points nationally, according to Real Clear Politics, down roughly two points from the week prior. And the FiveThirtyEight “polls-plus” election forecast gives the former secretary of state a 69.9 percent chance of winning the election as of Tuesday morning—a 10-point drop from last week, but nowhere near the near-even split from earlier this summer.

Of course, national polls may give you the temperature of the American electorate, but presidential elections are won and lost in the states and, more specifically, through the Electoral College. On that front, Clinton remains strong but not rock solid.

In all seven of the 2016 battleground states—Ohio, Pennsylvania, Florida, Michigan, New Hampshire, Virginia, and North Carolina—Clinton remains in the lead on average. (The race is still particularly tight in Ohio, Florida, and North Carolina, however.) According to the latest NBC News Electoral College map, Clinton is still in the victory zone, with a projected 272 electoral votes to Trump’s 174, with 270 needed to win. The Real Clear Politics electoral map is less favorable to both candidates, with Clinton holding 229 electoral votes to Trump’s 154, and 155 electoral votes still in a toss up.

In short, Trump has a path to victory, especially if his numbers continue to move the way they’ve shifted in the past week. But the math remains in Clinton’s favor.

Buckle up, folks. This wild ride isn’t over just yet.