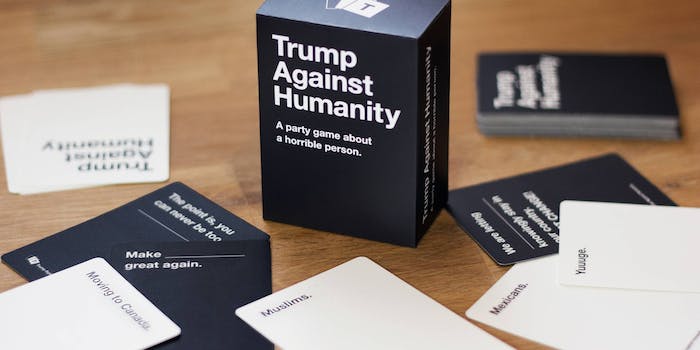 In the run-up to first Republican primary debate of the 2016 election, John Weaver, a campaign adviser to Ohio Gov. John Kasich, described to the Washington Post the process of prepping his candidate to debate against Donald Trump.

“Imagine a NASCAR driver mentally preparing for a race knowing one of the drivers will be drunk,” Weaver said. “That’s what prepping for this debate is like.”

Yet, for all of his self-styled unpredictability, there’s a certain consistency to Trump’s pronouncements, as his formulations start to repeat themselves. Injected into the near-constant stream of reflexive self-aggrandizement is a sort of insult Mad Libs, with the names of Trump’s endlessly growing list of enemies filling in the blanks—from Marco Rubio to Mexicans, from Muslims to Megyn Kelly.

It reminded Jeffry Da Silva of something else: Cards Against Humanity. The famously irreverent card game, in which players compete to fill in sentence blanks with some of the most hilariously awful things imaginable, seemed ripe for the Trump treatment. And lo, Trump Against Humanity was born. 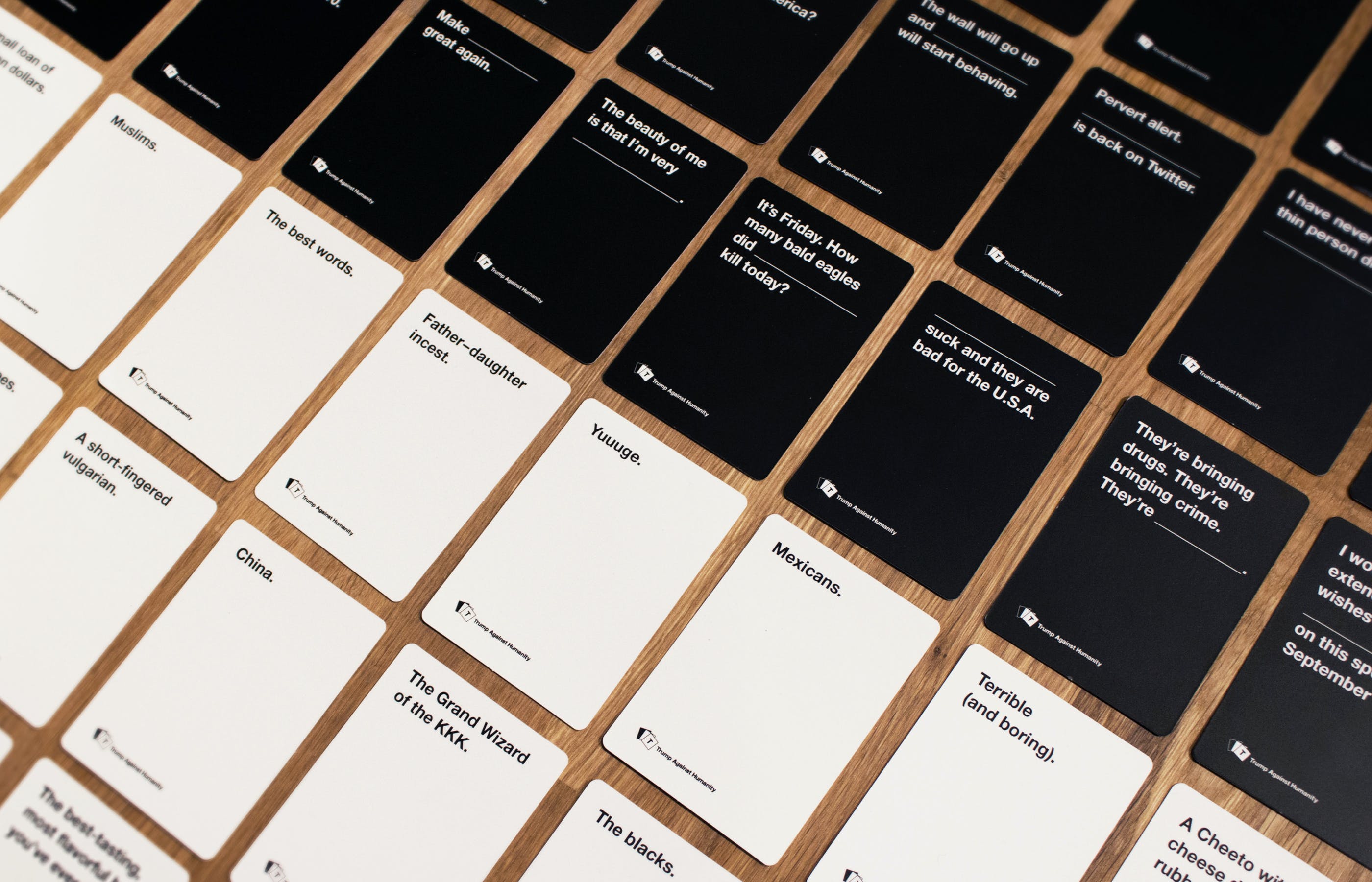 Da Silva is the co-executive creative director of the Canada-based ad agency Sid Lee, and Trump Against Humanity began at the Sid Lee Collective, an incubator inside the company where employees can develop non-commercial creative projects not tied to the work they’re doing with clients.

The idea came to him “around the beginning of the primaries. There was a period of about two or three weeks when there was just a massive amount of lines [Trump had said] in the news,” Da Silva recalled. “We were watching CNN at night, we were watching clips on YouTube and Fox News and everything. We had a bunch of team members scouring the Internet for the best line. We made a short list and we put them into the cards.”

Da Silva was looking to mine Trump’s statements for ridiculousness, and the real-estate-heir-turned-reality-TV-star provided an embarrassment of riches. The team ultimately only elected to put about 30 Trump statements in the deck. It’s a relatively small selection of Trump’s “best words;” Da Silva insists they probably could have let the deck swell to 500 cards without having to scrounge for material 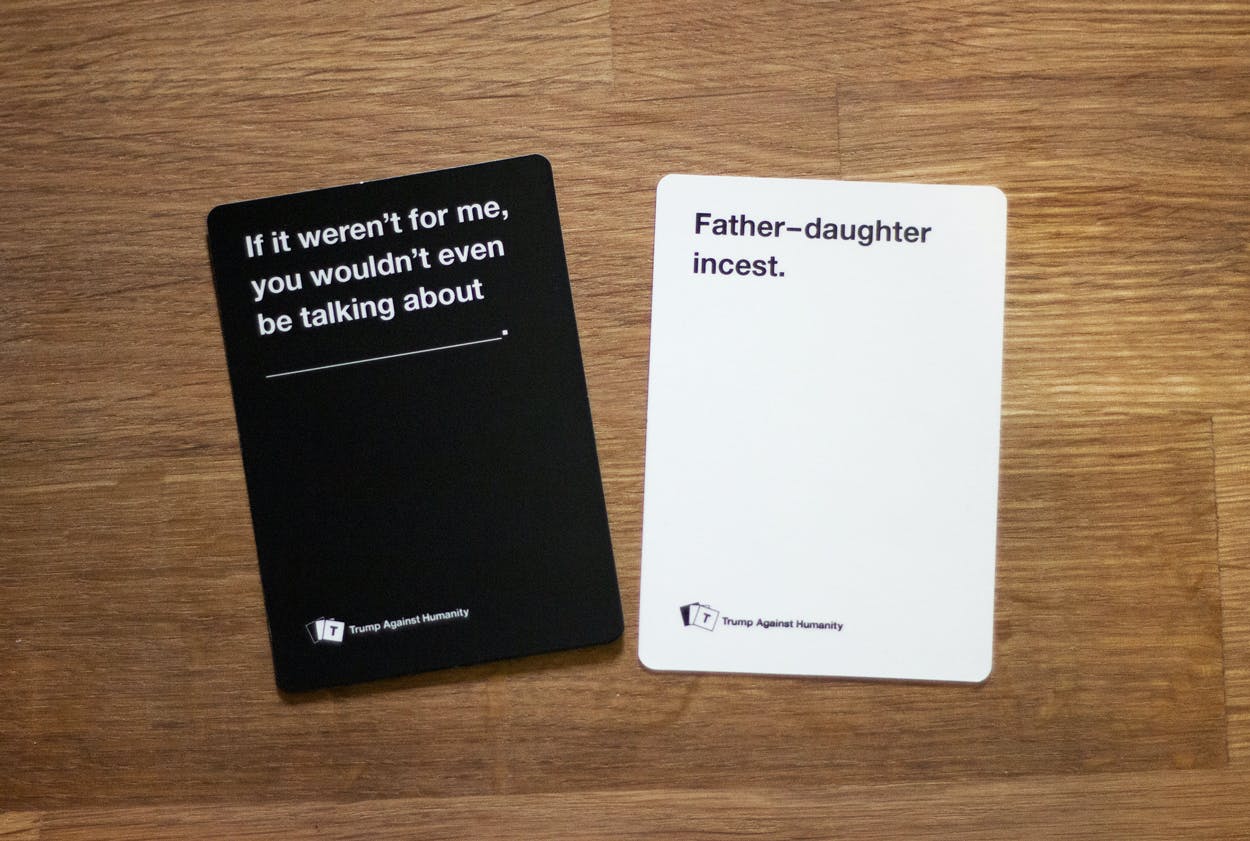 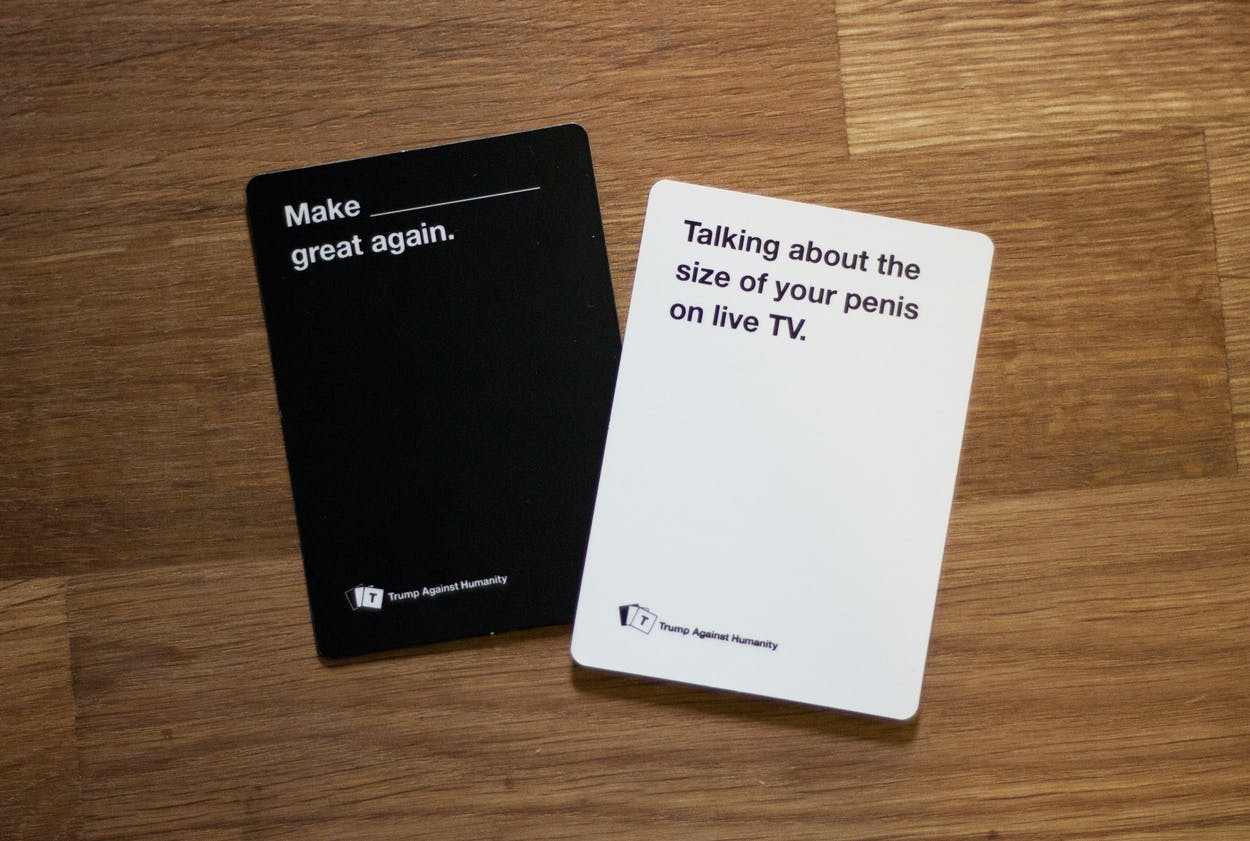 The game can be played on its own or as an expansion pack shuffled into a standard Cards Against Humanity deck. Building off of the success of the original game—which itself was an adaptation of Apples To Apples—a number of other unofficial Cards Against Humanity expansion sets have popped up in recent years like Crabs Adjust Humidity and Cats Abiding Horribly.

“In our expansion pack, it’s all Trump quotes,” Da Silva explained. “The black cards have the actual phrases with blanks in them. The white cards are thing you could fill in those blanks with. For example, [you could get] ‘Make America _______ again’ and … fill that in with any number of things that he’s said, like ‘Mexicans,’ or ‘micropenis,’ or ‘Muslims.’” 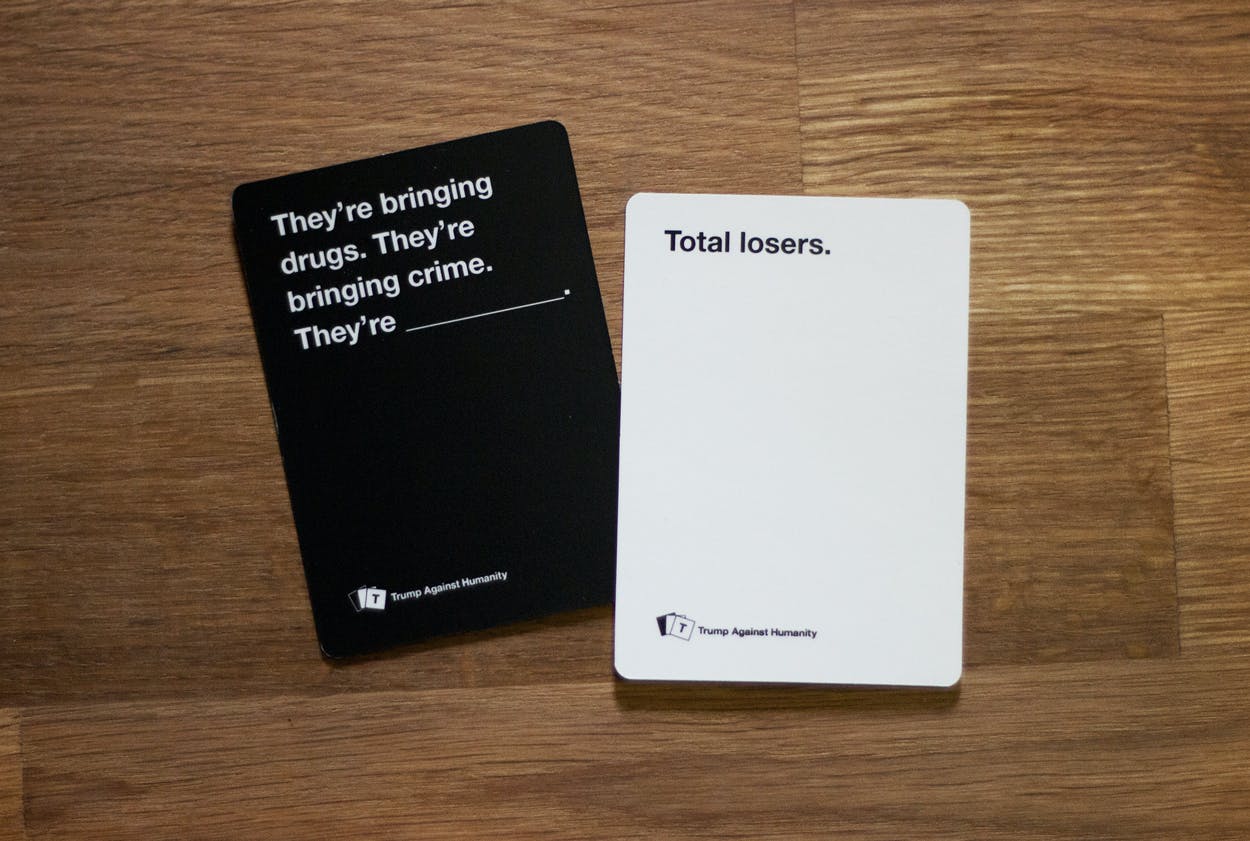 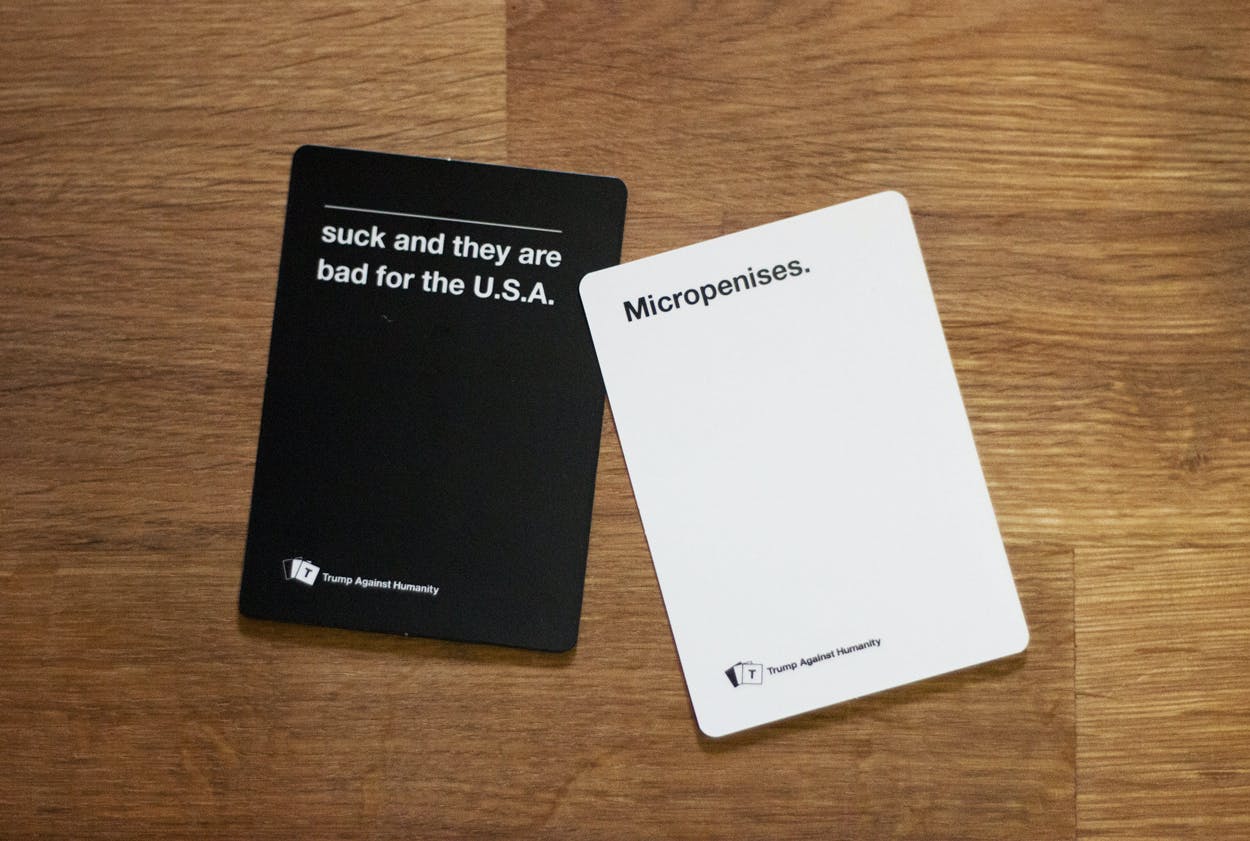 Sid Lee produced about 100 packs of the game, all of which are currently sitting in Da Silva’s office in Toronto. They first posted about the creation on social media last Friday, and the post immediately went viral. The original plan was to give away the game for free to people who signed up on the agency’s website, but Da Silva is reconsidering that plan now that thousands of people have requested packs.

“I feel like people were sort of like waiting for it,” he said. “Not only was it one of those things where not only is a great game, but just the line inherent in the name of the game Trump Against Humanity is pretty powerful. it’s just like ready-made for the Internet and for tweeting.”