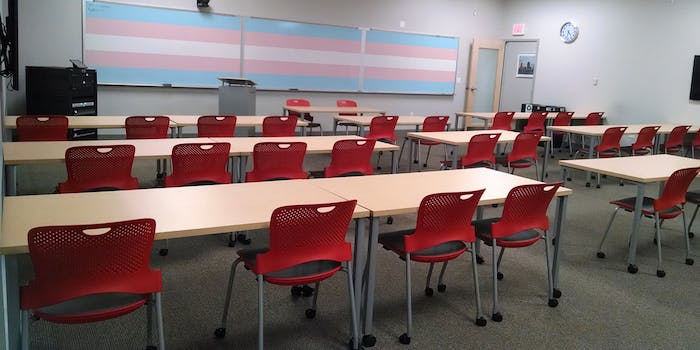 The first-ever transgender lobby is here to fight conservative policy

The group is planning to add a PAC to fund trans-friendly candidates.

While advocates for transgender equality have battled hard against state issues like restrictive bathroom access and religious discrimination, the transgender voice has been glaringly absent in the legislative process.

That is, until today. Say hello to the Trans United Fund—the nation’s first-ever transgender interest lobby.

The political-advocacy organization aims to build the political power of the trans and gender non-conforming communities and their allies, and to add a strong line of defense against the increasing attacks on LGBT rights sweeping the country’s conservative legislative offices.

In a statement emailed to the Daily Dot Monday, founding member and managing partner at the trans-led consulting firm Parallax Group Hayden Mora said the Trans United Fund will fill a “crucial gap” in the movement for transgender equality.

“The transgender community is no stranger to adversity, but what we face today is a new challenge—a coordinated, national and vicious attack from the far right at municipal, school district, and legislative levels,” said Mora. “We can not only fight these vicious political attacks that cater to fear and division, we must build a proactive politics to address other issues that impact our community—from HIV to homelessness to immigration, and the horrific epidemic of violence.”

The fund is a bi-partisan 501(c)(4) organization, which means it can legally only spend 50 percent of its money to influence elections. But a spokesperson for the group told the Daily Dot that Trans United Fund plans to add a PAC (political action committee) in the near future in order to make campaign contributions to trans-friendly candidates.

For 2016, the group already has its hands full with a four-point starting line: the endorsement of a presidential candidate, a legislative scorecard program, a platform for educating allies, and a “building trans/gender expansive political power” program.

Other members of the committee include Equality Utah’s Owen Smith, Arianna Inurritagui-Lint of the Florida Health Department’s HIV/AIDS project, Ruby Corado, a D.C. activist and organizer who helped get gender identity added to the D.C. Human Rights Act in 2006, and [email protected] Coalition director Bamby Salcedo.

“We save lives every day, but we can’t reach everyone with direct services,” said Salcedo in a statement Monday about why she joined the fund. “We need to move from being primarily reactive to more proactive, going to the root of institutionalized transphobia. And that requires a stronger political voice.”

The organization isn’t just comprised of top players in the trans community—it also has the backing of some serious D.C. public policy heavyweights. Robert Raben, a former assistant attorney general in Bill Clinton’s administration who now runs an influential firm with a $4.5 million lobbying income, is throwing his power behind Trans United Fund.

“Trans United Fund’s launch is the next example of sophistication within this movement,” Raben said in an email statement on Monday. “As long as we have a privately raised finance system, participating in it is crucial to achieve the progress we need. Few in the nation have faced the challenges transgender Americans face; kudos that despite the discrimination, they are still willing to engage in the political process to make this country stronger.”