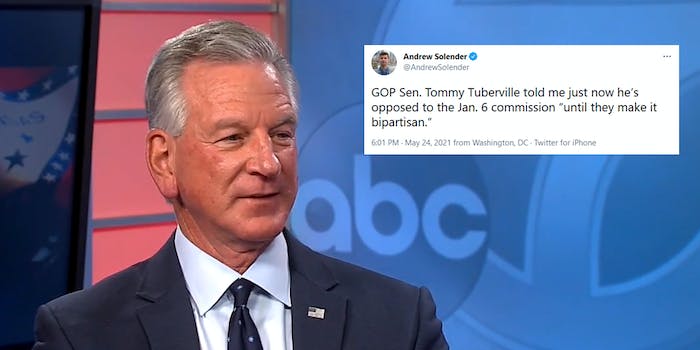 Sen. Tommy Tuberville is being mocked for his remarks about the Jan. 6 commission.

Sen. Tommy Tuberville (R-Ala.) might want to brush up on some basic government lingo. Specifically, he should look up what “bipartisan” means.

Tuberville, who has a history of being less-than-knowledgeable about the office he’s currently serving in, was asked about whether he would support a bill that would create a commission that would look into the Jan. 6 Capitol riot.

It seems like a long shot that Tuberville, an ardent supporter of former President Donald Trump, would be supportive of a commission. But he told Forbes his exact reason for not supporting it: he wanted the commission to be bipartisan.

That reasoning raised a few eyebrows considering the current bill would create a commission that was half Democrats and half Republicans.

Or, in other words, bipartisan.

Specifically, according to NPR, the bill the House passed last week would set up a commission that had an equal number of Democrats and Republicans. The bill faces an uncertain fate in the Senate, where numerous Republicans would have to vote in favor of it to bypass a filibuster.

Also, as Forbes notes, 35 Republicans in the House voted in favor of the commission bill, making it more bipartisan than most contentious House votes.

Tuberville’s remarks to Forbes echoed what he said last week, according to AL.com. The Alabama senator said, ahead of the House vote to approve the commission, that he didn’t think “you’re going to get many Republicans to vote for any commission unless it is 100 percent bipartisan.”

Regardless, Tuberville’s remarks were quickly mocked by people online, who noted the obvious: The commission is bipartisan.