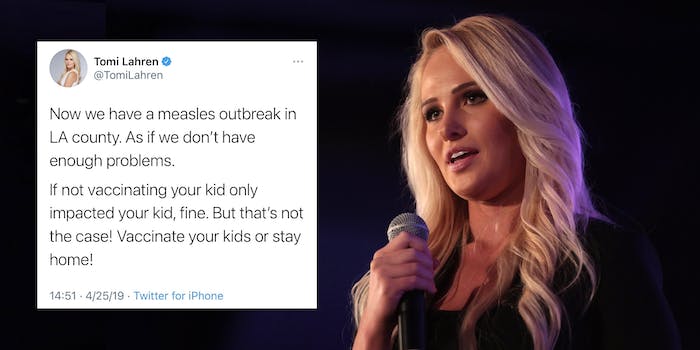 The conservative once urged parents to vaccinate their kids for measles.

The incident unfolded after the conservative commentator pushed back against efforts by President Joe Biden to encourage unvaccinated Americans to protect themselves against COVID-19.

“When Biden’s vaccine patrol comes a knockin’ they can kiss my country ass!” she tweeted. “Take your experimental vaccine and shove it in your own arms!”

Yet Twitter users quickly uncovered a previous remark from Lahren in 2019 in which she urged her parents to vaccinate their children against measles.

“Now we have a measles outbreak in LA county. As if we don’t have enough problems,” she tweeted. “If not vaccinating your kid only impacted your kid, fine. But that’s not the case! Vaccinate your kids or stay home!”

“Biden should be sending his vaccine patrol down to the border,” Lahren tweeted. “The illegal immigrants are bringing in lots of COVID!! Start there!”

Ironically, Lahren’s follow-up tweet once again, whether she realized it or not, defended the efficacy of vaccines.

The tweets were just one of several that went viral for highlighting Lahren’s hypocrisy.

Lahren also became a topic of debate on Monday after she defended transgender conservative Caitlyn Jenner. Twitter users were quick to point out her previous statements decrying the transgender community.