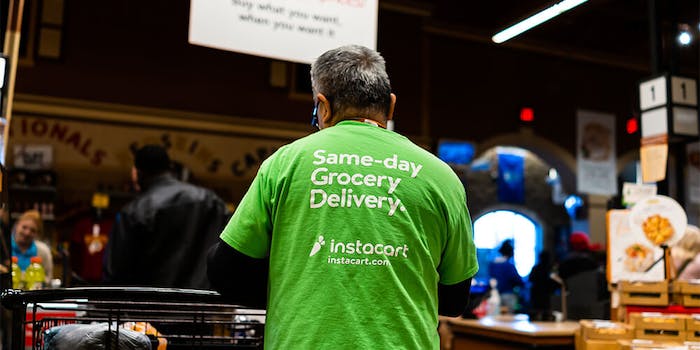 The coronavirus pandemic has forced people to reassess their ways of daily life. In some cases, the outbreak has inspired incredible acts of heroism and courtesy from people who are striving to recognize the humanity of their neighbors in a time of great disconnect. It has also inspired some people to exert their privilege over others to get what they want.

The latter is evident in the act of tip baiting, an insidious practice in which customers using delivery service apps such as Instacart will lure workers with huge tips to take their orders, only to cancel the tips when they deliver their groceries. Instacart worker Annaliisa Arambula detailed one such situation to CNN Business, in which she completed a nearby grocery order with a $55 tip. But when she checked the app an hour after completing the order, she found her tip had disappeared. In its place, Arambula received a message saying the “customer modified the tip post-delivery” and earned a meager $8.95 for her efforts.

As COVID-19 has ravaged towns and cities across America, grocery delivery workers find themselves near the top of the “essential workers” list alongside hospital workers and grocery store employees. They also find themselves without adequate protection against fraudulent behavior such as tip baiting, which means they continue to effectively risk their lives in public spaces only to receive paltry wages and a slap in the face from the customers who place orders with them. With customers behaving this way, it’s no surprise Instacart workers planned to strike for hand sanitizer and hazard pay.

Tip baiting is especially easy to do on Instacart because it allows customers to change their tip for up to three days after placing an order. Competing apps like Uber Eats and Postmates reportedly only allow customers to adjust their tips for between one and 10 hours. An Instacart spokesperson told CNN Business that “the vast majority of people in March adjusted their tip upward or did not adjust their tip after delivery,” and that the company recently removed the “none” tipping option, requiring customers to manually enter $0 if they want to eliminate their tip. This should theoretically dissuade Instacart users from tip baiting—but if you’re the kind of person who would even consider tip baiting in the first place, is typing in a single “0” from the comfort of your couch really going to convince you not to jeopardize another person’s livelihood?

One of the more infuriating aspects of tip baiting is that, while some Instacart customers may be immunocompromised and unable to buy their own groceries in person, many of them likely just don’t want to complete the unsavory task themselves. Grocery delivery is ultimately still a luxury service, and it stands to reason that anybody using apps like Instacart or Uber Eats in the first place has the means to tip workers fairly.

Rather than screw drivers who are struggling to make ends meet—sometimes providing for their entire household—these app users could simply tip workers what they’re worth and trust that they’ll get prompt service for current and future orders. It’s not like anybody’s blowing their pocket change on happy hour beers or single-origin cold brew right now.