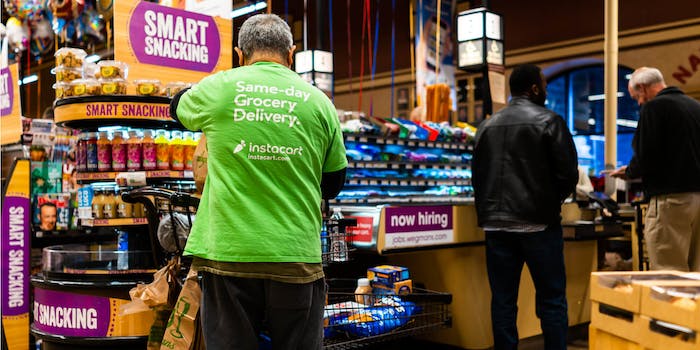 'We deserve and demand better.'

While people across the country are quarantined in their homes to prevent the spread of the coronavirus, many are resorting to delivery orders and online grocery stores. But the workers packing up orders say they’re not receiving the safety and security required during the current coronavirus crisis.

According to a Vice report, almost 200,000 gig workers employed under grocery delivery service Instacart are being denied basic amenities such as hand sanitizers, disinfectant wipes, and soap. All have been recommended by the Center for Disease Control (CDC) to lower chances for someone to contract the disease.

Some of Instacart’s 175,000 workers are planning a walk-out on Monday to demand hazard pay; basic disinfectant amenities such as sanitizers, soaps, and wipes; and for workers with pre-existing conditions to be included in the paid sick leave scheme, since many have been advised to stay at home during this time.

One of the organizers lambasted the company’s disparities in treatment for corporate versus gig workers, who package the goods customers are buying.

Vanessa Bain, an Instacart worker in California who is one of the lead organizers of Monday’s strike, said corporate employees get to work from home, receive life insurance and health insurance, and are given paid time off on top of paid sick and family leave. Bain said meanwhile, gig workers who “are putting their lives on the line to maintain daily operations” don’t have any such protection.

“We deserve and demand better,” Bain told Vice. On Monday, workers plan to not take any orders until their demands are met. For hazard pay, they are demanding an additional $5 for each order.

Meanwhile, Instacart is continuing—and even expanding—its business. On Monday, the company announced an opening for 300,000 contract workers to meet the high demand of their customers. Until Friday, the company offered two weeks paid sick leave for workers who tested positive. On Friday, Instacart extended that to 30 days.

Instacart also implemented a bonus program for hourly workers and an in-app feature that allows workers to report safety issues.

“The last few weeks have been the busiest in Instacart’s history and our teams are working around the clock to reliably and safely serve all members of our community,” CEO Apoorva Mehta said in a statement to CNN.

But it’s still unclear why Instacart, valued at almost $8 billion in 2018, is denying its workers basic amenities, like hand sanitizer, recommended by CDC.

“We want to underscore that we absolutely respect the rights of shoppers to provide us feedback and voice their concerns,” Instacart said in an emailed statement to the Daily Dot on Friday.