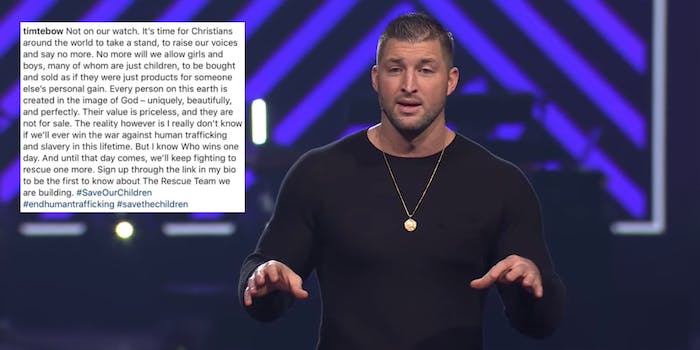 Sports star Tim Tebow has caught the attention of QAnon supporters after denouncing human trafficking on his Instagram page.

In the post, the former NFL quarterback called on his fellow Christians “to take a stand” and “say no more” to the trafficking of children.

“No more will we allow girls and boys, many of whom are just children, to be bought and sold as if they were just products for someone else’s personal gain,” Tebow wrote. “Every person on this earth is created in the image of God – uniquely, beautifully, and perfectly. Their value is priceless, and they are not for sale.”

The post goes on to promote what is known as “The Rescue Team,” a newly formed offshoot of the Tim Tebow Foundation aimed at fighting human trafficking.

Tebow’s comments were followed by numerous hashtags, including #SaveOurChildren, #endhumantrafficking, and #savethechildren, that have been heavily promoted QAnon supporters in recent weeks.

QAnon adherents believe that President Donald Trump is secretly sending them signals about his battle against a global network of child-eating pedophiles run by the Democratic Party.

The conspiracy theory has led to numerous instances of violence and is considered a potential domestic terror threat by the FBI.

The group has received widespread attention in recent weeks after nationwide protests to “save the children” saw QAnon fans momentarily leave their keyboards for the real world.

But is Tebow’s post an endorsement of the QAnon conspiracy? It’s hard to say.

Tebow thus far has not referenced Q by name or used any hashtags more directly associated with the conspiracy. Tebow, however, has not refuted any links to Q since his post went viral.