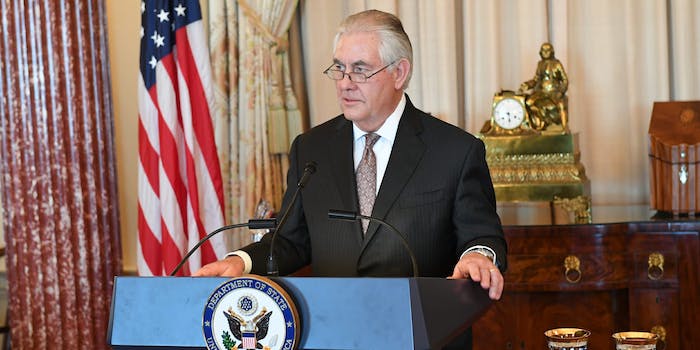 Tillerson is the latest high ranking official to leave the Trump administration.

President Donald Trump announced on Tuesday morning that Secretary of State Rex Tillerson would be leaving his post after serving for just over a year.

Tillerson is the latest Trump administration official to leave, joining a long list of people who have been ousted or resigned including: Sean Spicer, Hope Hicks, Steve Bannon, and Reince Priebus, among others.

The president asked the Secretary of State to leave his post on Friday, the Washington Post reports.

In a statement to the Post, Trump thanked Tillerson “for his service” and added that “a great deal has been accomplished over the last fourteen months.”

Tillerson and Trump’s relationship has been questioned for months, and reports late last year suggested the president had wanted to replace him with Pompeo.

During a press conference following a fervor over the reports, Tillerson criticized the notion that he wanted to leave his position, but did not outright deny calling Trump a “moron.”

Trump and the former secretary of state also reportedly butted heads on other international issues, including the president’s tough stance on North Korea.

A senior White House official told reporters the changes came because “the president wanted to make sure to have his new team in place in advance of the upcoming talks with North Korea and various ongoing trade negotiations.”