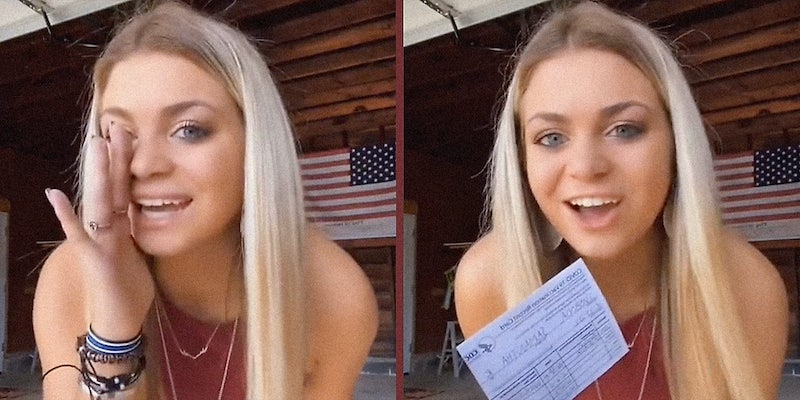 'Your information is on the card. Look'

One of former President Donald Trump’s supporters may have TikToked themselves into federal charges. A TikToker recently posted what many are calling evidence that they’re using a fake COVID-19 vaccine card, which is a federal offense.

In the TikTok, unearthed by @thatdaneshguy (Danesh), @notsamantharose17 asks, “Who in there still hasn’t been vaccinated?” She approaches the camera and mouths, “Me.” Then she lip syncs as “What You Gonna Do About It?” plays.

In Danesh’s stitch of @notsamantharose17’s TikTok, he pops onto the screen and replies, laughing: “Quite literally report you to the FBI for a fake COVID vaccine card.”

“But why would you challenge this? Your information is on the card. Look.”

The Daily Dot was unable to contact @notsamantharose17 via multiple social media platforms. A direct message sent to her via TikTok generated an automatic reply that her account is “temporarily blocked from receiving messages due to multiple community guidelines violations.”

On social media she also shares her support for Trump and disdain for President Joe Biden. In one TikTok, she brandishes a “Fuck Biden” flag.

In March, the FBI issued a public service announcement warning that it’s a federal offense to make, sell, or use a fake vaccine card. The announcement was prompted by an increase in people selling fake cards online or making them at home.

As the Daily Dot recently reported, Danesh has previously gone viral for using TikTok to crusade against child abusers.

Danesh told the Daily Dot via Twitter direct message that while he agrees getting vaccinated is a personal choice, pretending to be so can be harmful.

“She is using a fake vaccination card to deceive guidelines at public events (like a concert she recently went to according to her Instagram) where there will be other people there who she is making a medical choice for,” he said. “Vaccinations reduce the chance of spread, but not completely so when she’s ignoring guidelines and spreading it to others, she is responsible for the people she infects.”

His stitched TikTok of the alleged fake vaccine card video went massively viral, racking up 11 million views as of this writing. Versions he posted on Twitter and Instagram have been watched hundreds of thousands of times cumulatively.

Danesh said he was surprised that this TikTok went viral. “It was the least work I’ve ever had to put into a single video and it is now my highest viewed video on multiple platforms.”

Many commenting on his TikTok have taken it upon themselves to tag the FBI in comments and reposts. Mostly people are stunned and amused that someone TikToked what they describe as incriminating evidence.

“She thought she did sumn,” one TikToker said.

The sarcasm was particularly rich on the Parler Watch subreddit.

“Stickin’ it to the libs one felony at a time,” said one redditor, to which another replied, “Oh man. I’m getting soooo tired of being owned.”

Being convicted of using a fake vaccine card carries a penalty of up to five years in prison and a $5,000 fine.