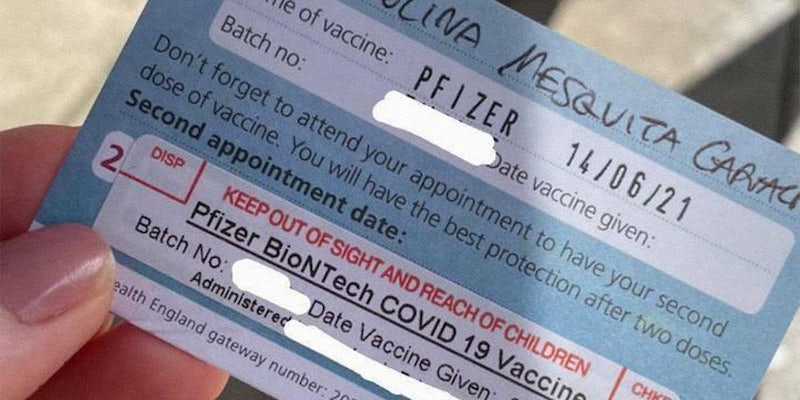 For $150, this Facebook group will sell you an ‘authentic’ vaccine card

A Facebook group is selling COVID-19 vaccine cards. It shows how easily scammers are using major platforms to push illicit products like these.

The group, DAVIS Martin NHS and CDC, urges people, “Get your Covid19 vaccination card without being vaccinated so as to avoid the vaccination scheme.” It claims that the cards are “authentic, valid and registered” with the Centers for Disease Control and Prevention (CDC) and agencies in other countries.

DAVIS Martin NHS and CDC launched a little over a week ago, on Aug. 29. Already it has nearly 1,000 followers.

The rapid growth of the account illustrates the pervasiveness of people seeking and selling fraudulent vaccine cards—or at least offering them. Vaccine card sales and vendors have increased astronomically as the COVID vaccine has become more commonly required. Last month, CBS News reported that on Telegram and WhatsApp alone, there has been an increase of more than 250% of fake vaccination card vendors since the beginning of the year. WhatsApp is Facebook’s encrypted messaging app.

Colleges, concerts, even medical facilities have reportedly been presented with fake vaccine cards by people who are coming to be known as “jab dodgers.”

At prices ranging to up to $200 per card, it can be an extremely profitable business with little overhead, a tantalizing combination for criminals and scammers. In April, the National Association of Attorneys General (NAAG) called on several internet companies (though not Facebook) to prevent people from selling fraudulent vaccination cards.

NAAG’s letter, signed by a bipartisan coalition of 47 state Attorneys General, called on Twitter, eBay, and Shopify to do more to crack down on what was already a growing, illicit industry.

“The false and deceptive marketing and sales of fake COVID vaccine cards threaten the health of our communities, slow progress in getting our residents protected from the virus, and are a violation of the laws of many states,” NAAG’s letter stated.

Some of the images of vaccine cards it’s posted include people’s names, birth dates, type of vaccine and batch number, and location they were purportedly vaccinated. One photo posted on Telegram appears to have been lifted from the social media accounts of a former American Idol contestant.

On both platforms, it offers to sell vaccine cards internationally. An image posted on Telegram offers them to people in the United States, United Kingdom, Ireland, Canada, Australia, and the European Union.

The Telegram channel instructs people to directly message a user who describes themselves as a “doctor, working with the NHS and CDC vaccination centre worldwide.” NHS refers to the United Kingdom National Health Service.

There have been cases of people allegedly paying medical professionals to be illegally entered into vaccine databases. It’s unclear if that is also happening with this scheme or if cards will even be sent. But it is surely designed to part people who don’t want a shot with their cash.

Whoever runs the account told a Daily Dot reporter posing as an interested buyer that a CDC vaccine card would cost $150. They instructed a reporter to send payment via PayPal.

The PayPal account is under a different name than the Telegram user. The name they use on PayPal and on the Gmail address associated with the account is an uncommon one shared by a doctoral student in North Carolina. Like the former American Idol contestant, the student appears to have nothing to do with the vaccine card selling operation.

It isn’t clear who’s really behind these accounts and whether it is an individual or a group. It’s instructed people to contact different Telegram users with similar names on different occasions. Earlier this month, it told subscribers to contact another similarly named person who shares the name of a well-known source of vaccine misinformation and who was featured in Plandemic.

Since the earliest days of the pandemic, social media companies have struggled to control COVID disinformation on their platforms. Now they’re faced with the problem of people selling fake vaccine cards. In spite of the efforts of companies themselves and law enforcement, the online market for the cards is booming. Fake cards have been found for sale on Amazon, Etsy, Instagram, Telegram, Facebook, and more.

While any form of medical misinformation is potentially harmful, selling vaccine cards is also illegal. Buying, creating, or using a fake or otherwise fraudulent vaccine card is a federal crime punishable by up to five years in prison.

In a comment to the Daily Dot, PayPal said “PayPal takes these matters seriously, and we have a zero-tolerance policy on our platform for fraudulent activity. We do not permit the use of PayPal services in any way that we believe may violate or attempt to circumvent laws around the world, and we will quickly take steps to limit the accounts and end relationships with customers who are found to misuse our platform.”

“We prohibit anyone from buying or selling medical documents—whether they are fake or genuine—from our platforms, including COVID-19 vaccine cards and certificates,” a Facebook spokesperson said. “We continue to identify and remove this content whenever we find it, and will disable accounts, pages, or groups that repeatedly break our rules. The DAVIS Martin NHS and CDC page has been removed for violating Facebook’s policies.”