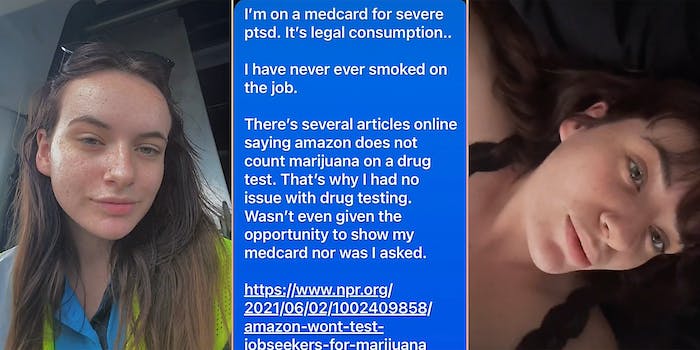 ‘For my Christmas, I can’t make rent’: TikToker says Amazon fired her by text for testing positive for marijuana

The company did not respond to an inquiry from the Daily Dot.

A TikToker claims Amazon fired her for testing positive for marijuana. She also says that she has a medical marijuana card and that she was terminated in a text message.

On Thursday, TikToker @loutinabae (“Stina”) posted a screenshot of her response to someone named Mario, who presumably fired her. She’d previously said she’d been fired via text in a TikTok she was subsequently taken down.

“I have never ever smoked on the job,” she wrote.

Her bio says that she lives in Florida, where medical marijuana is legal.

She explained to Mario that she was under the impression that Amazon doesn’t fire people for testing positive for marijuana. She claims that the company didn’t give her the chance to prove that her consumption of the drug is legal.

She also included a link to an article about Amazon’s marijuana policy.

In June, the company announced that it wasn’t going to prohibit people from working there for testing positive for marijuana under most circumstances. It also said it would publicly support legalizing marijuana on the federal level.

“We will no longer include marijuana in our comprehensive drug screening program for any positions not regulated by the Department of Transportation, and will instead treat it the same as alcohol use,” executive Dave Clark wrote on the company’s blog.

“We will continue to do impairment checks on the job and will test for all drugs and alcohol after any incident.”

Trina did not include her job title or reveal the circumstances that led to her being tested.

Stina then laid into the company itself.

She said that she wasn’t genuinely interested in keeping the Amazon job. Stina accused them of “constantly threatening to give people days off for mistakes when they’re still learning.” She added that “having such high expectations and accusing people of milking hours when you don’t give them enough to make a living is not a workplace for me.”

She said that, “Someone needed to speak up and if that’s me so be it.”

“You guys are bullying the employees who can’t catch on right away.” Stina also wrote that she has a learning disability and that she felt pressured and attacked during her time working there.

As a parting shot, she wrote, “Merry Christmas. For my Christmas I can’t make rent. Hope yours is better.”

She then asked Mario not to contact her again.

In the comments, people cheered Stina for standing up for herself.

“You can do so much better than that. Fuck Mario (and Luigi too),” wrote one.

Some suggested she sue the company. Stina replied that Florida law doesn’t allow it. Florida’s a right to work state, which means you can be fired for any reason except those covered by law, such as race, age, or disability.

Some took the opportunity to drag Amazon, which has faced complaints over how it treats workers for years.

“I work at Amazon and that’s bs,” wrote one. “Amazon do not take care of their workers that’s why I do the bare minimum.”

Amazon didn’t immediately respond to request for comment sent via email Thursday afternoon. The Daily Dot was unable to get in touch with Stina.