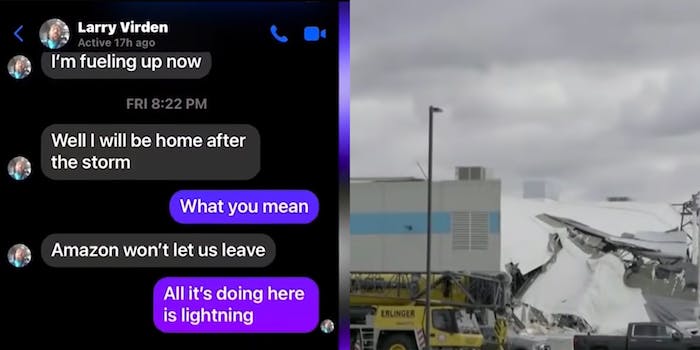 Six workers died in the storm.

Screenshots of a message exchange allegedly show an Amazon worker saying he was not allowed to leave a delivery warehouse minutes before he was killed in a tornado.

Larry Virden was one of six people who died Friday after a tornado collided with an Amazon facility in Edwardsville, Illinois.

On Monday, independent media site More Perfect Union posted screenshots of the messages in which a person alleged to be Virden says at 8:22pm that he’ll “be home after the storm.”

Virden’s partner, Cheri Jones, told the New York Post that she had been messaging with him Friday night as the storm approached.

“I got text messages from him,” she told the outlet. “He always tells me when he is filling up the Amazon truck when he is getting ready to go back … I was like ‘OK, I love you.’ He’s like, ‘well Amazon won’t let me leave until after the storm blows over.’”

Per the screenshots of text messages, Jones texted Virden at 8:51pm. “So what are you doing,” she wrote. “I hope everything is ok. I love you.” Madison County emergency officials reported a partial roof collapse at the delivery facility at 8:27pm, the New York Times reported.

Virden’s family did not immediately respond to the Daily Dot’s request for comment.

Amazon spokesperson Kelly Nantel told the Times that by Amazon’s estimates, the tornado hit the delivery station 11 minutes after alerts first warned employees of its incoming. Nantel also said there are 190 workers across different shifts employed at the facility, and they are allowed to carry their cellphones while working.

In an emailed statement to the Daily Dot, Nantel said the company was “deeply saddened” that workers died as a result of the storm but did not directly address whether employees were told they could not leave the delivery facility.