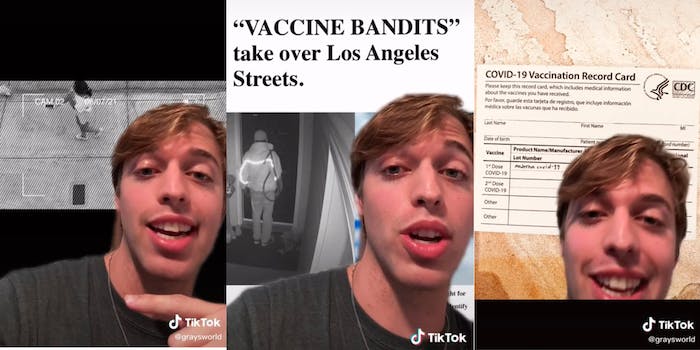 People seem to be falling for an 'intentionally ridiculous' joke.

TikTok users and other people online appear to be falling for the false and intentionally comedic claim that “vaccine bandits” are forcibly injecting people in California.

In footage uploaded to TikTok on Monday, verified TikTok user @graysworld purports to show a news article on the issue as well as surveillance video of a woman being inoculated against her will on the street in Los Angeles.

“So apparently what these guys do is they walk up to you on the street and they ask if you’re vaccinated and if you hesitate at all they inject you with a vaccine right on the spot,” @graysworld says. “And then they like, throw a vaccine card at you after they inject you and it says like ‘Hollywood Boulevard’ or wherever you got injected and they even leave it blank so you can fill in your name.”

Later on in the video, which has already racked up more than 3.7 million views, @graysworld goes on to say that the so-called vaccine bandits are also leaving notes at the homes of their victims to let them know that they will find them again when it’s time for a second dose.

“Like, why is no one else talking about this?” @graysworld asks. “Like, I need to see if people know about this in the comments. Like, this is next level.”

@graysworld, whose real name is Gray Fagan, confirmed to the Daily Dot on Tuesday that the “intentionally ridiculous” video was in fact fake.

“I don’t ever try to assert my videos as fact,” @graysworld said. “Each individual video is purposely designed to ‘look’ and ‘feel’ real, all the while growing progressively more and more outlandish, which there-in-lies the joke. If the viewer fails to do any further inspection from there, it’s on them if they actually believe it to be true!”

But the comment section for the video is filled with many users who appear to believe the claim, with some even expressing fear that they too could be targeted.

“Im provaccine [sic] but this is actually terrifying,” one user said in a comment with over 15,000 upvotes. “Violent and violating.”

Not only that, a search for the term “vaccine bandits” shows that the claim has made its way to other social media platforms such as Twitter as well.

“Goodmorning [sic], apparently in LA there’s a group called ‘VACCINE BANDITS’ and they’re running around asking people if they’re vaccinated and if they say no they vaccinate them on the spot against their will and throw a card at them too even say see you in two weeks,” @TacticalFrosty wrote, joining many other people who tweeted about it.

But the idea that “vaccine bandits” are running around vaccinating unsuspecting people is easily debunked.

For starters, @graysworld admits in his TikTok bio that his profile is dedicated to “~scripted~ chaos,” suggesting that his videos are fabricated. Further evidence seems to suggest @graysworld is clearly intending for it to be a joke.

The TikTok user’s bio even shows a LinkTree account, a service that allows users to list out links to their social media profiles and other contact info.

The top link claims to go to the “VACCINE BANDITS ARTICLE” but instead leads to Rick Astley’s “Never Gonna Give You Up” music video on YouTube, in other words the link is “Rickrolling” users.

The alleged Los Angeles Times article featured in the video is also fake. A search for “vaccine bandits” on the publication’s website shows no such report. A search for the term on Google News likewise yields no legitimate results.

A public relations representative with the Los Angeles Police Department (LAPD) also confirmed to the Daily Dot that it was unaware of any reports relating to the forced injection of residents with vaccines.

This post has been updated with a quote from @graysworld.