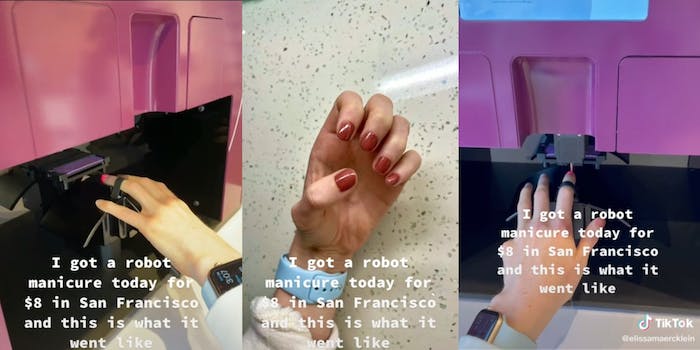 ‘This is kind of sad’: TikToker gets manicure by a robot in viral video, sparking debate

'I love my nail lady. She works so hard for her business.'

A TikTok user who received a manicure from a robot has sparked debate online over automation and the future of labor.

Elissa Maercklein, who received the manicure earlier this week in San Francisco, uploaded footage of the appointment in a clip that has since been seen more than 7 million times.

The shop, known as Clockwork, opened just last Friday and has already garnered widespread attention for its contactless manicures.

The device works by taking a photograph of a customer’s nails before coating them with polish in a process that takes just 10 minutes.

In a statement online, Clockwork argued that its streamlined service saves its customers valuable time.

“Why nails? For many of us, it’s a weekly task to check off the list. Most people spend 60 minutes per week on their nails,” the company said. “That’s 3,120 minutes a year! But if we can cut that down to just 10 minutes — what would you do with those extra moments?”

But many TikTok users pushed back against the innovation, expressing concerns over the automation of the beauty industry.

“This is kind of sad, I love my nail lady,” @alexandrahunter10 wrote. “She works so hard for her business.”

Other users agreed, suggesting that the device would replace countless nail artists across the country.

“The future is going to put so many people out of jobs…” @alexishennessey said. “It’s cool until it’s not.”

Not everyone was opposed to the robot. Many felt that the device would be extremely useful in locations such as airports and help customers save money.

For those concerned about the future of nail salons, however, Maercklein asserted that the device in no way could replace the work of seasoned nail artists—who do much more than simply paint nails.

“I don’t think this will replace the artistry of nail technicians but I do think for professionals and working people, it’s a really great quick option to be able to get your nails done,” Maercklein said.