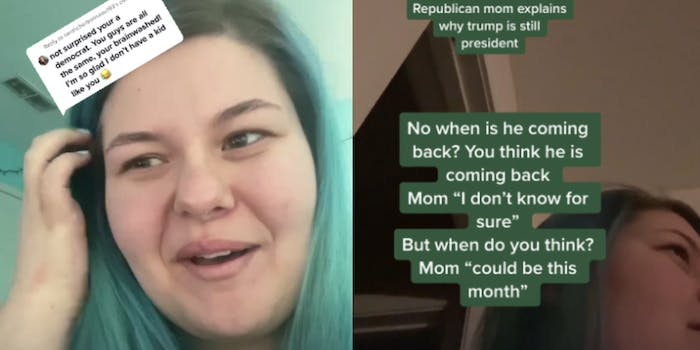 The popular TikToker also says that she is currently trying to save up enough money to move out of her parents' home.

A TikTok user has gone viral after confronting her mother for believing that former President Donald Trump is still the president.

In video posted this week, the TikTok user, known as @.annapadgett, can be heard arguing with her mother over her conspiratorial beliefs.

“Trump has the nuclear codes,” the mother says, repeating a popular conspiracy theory spread primarily by followers of QAnon.” Biden hasn’t been given them.”

The TikTok user responds by repeatedly calling her mother a liar, but to no avail. The mother, who says that she is “not crazy,” continues by falsely asserting that Trump will reveal himself as the country’s actual leader in the coming days.

Since being uploaded on Thursday, the video has been viewed more than 2.3 million times.

The Daily Dot reached out to @.annapadgett to inquire about the video but did not receive a reply by press time.

The footage is just one of several videos @.annapadgett has uploaded in recent days highlighting her mother’s comments on current events.

In another video, the TikTok user argues with her mother over the false claim that the 2020 presidential election was rigged.

The videos are spurring conversation among TikTok users who also have family members with conspiratorial beliefs.

“This is my mom and it’s so sad,” @meganradio2003 said. “My mom thinks that there are two Joe Biden’s and that one is used for speeches and the other runs the country.”

The popular TikTok user also says that she is currently trying to save up enough money to move out of her parents’ home.