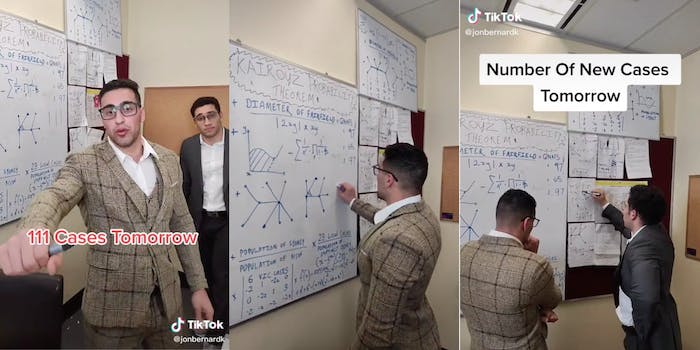 The Australian government claims the 'predictions' were the result of an internal leak.

A TikTok user who allegedly predicted the number of COVID-19 cases in Australia five days in a row is said to have been the target of a sting operation after his streak was brought to an end this week.

Comedian Jon-Bernard Kairouz made headlines after revealing the number of infections for each day in New South Wales (NSW) on his popular TikTok account hours before the government.

Kairouz has repeatedly stated that his so-called predictions came thanks to simple mathematical equations, which he repeatedly showed on TikTok.

But Kairouz’s streak came to an end on Monday after he incorrectly claimed that 109 new cases would be announced. Instead, only 98 were reported by NSW’s Ministry of Health.

Reports began flooding in that Kairouz’s predictions were actually the result of a government insider feeding him the numbers. Not only that, one reporter asserted that the government purposely reported incorrect numbers internally in order to find Kairouz’s source.

“Word is a trap has been set and Jon-Bernard Kairouz’s figure of 109 is incorrect today @SkyNewsAust,” Andrew Clennell correctly predicted.

A second journalist also noted prior to the government’s Monday COVID briefing that Kairouz’s prediction would be wrong and that NSW was working to “smoke out” the leaker.

Numerous journalists also claimed that NSW had used aggressive surveillance of  “every phone and computer” in order to find the leaker.

NSW Health Minister Brad Hazzard later confirmed that they had indeed found Kairouz’s source but denied that a “sting” operation had been carried out.

“Can I say it was a disappointment that something as serious as our messaging to the community in a pandemic, clearly someone somebody in the system was feeling the need to disclose those figures to somebody who was not an appropriate person to be making commentary about it,” Hazzard said. “And so, Health looked at the issues around that, I saw someone saying on social media that it was a sting, no it wasn’t.”

Responding to his failed prediction and the leaker’s capture, Kairouz doubled down on his previous claims that his numbers had been generated by math alone in a statement on Twitter.

“The number confirmed today by the NSW government/health was given solely to discredit me and my mathematical genius,” Kairouz said, referring to himself as the “People’s Premier.” “They claim to have captured the person supposedly leaking the information, through high-level surveillance and trapping, which just disrespects the hard work and mathematical process conducted by my brothers and I.”

NSW Health has not commented on the response from Kairouz, who continues to use the incident to promote his social media presence.