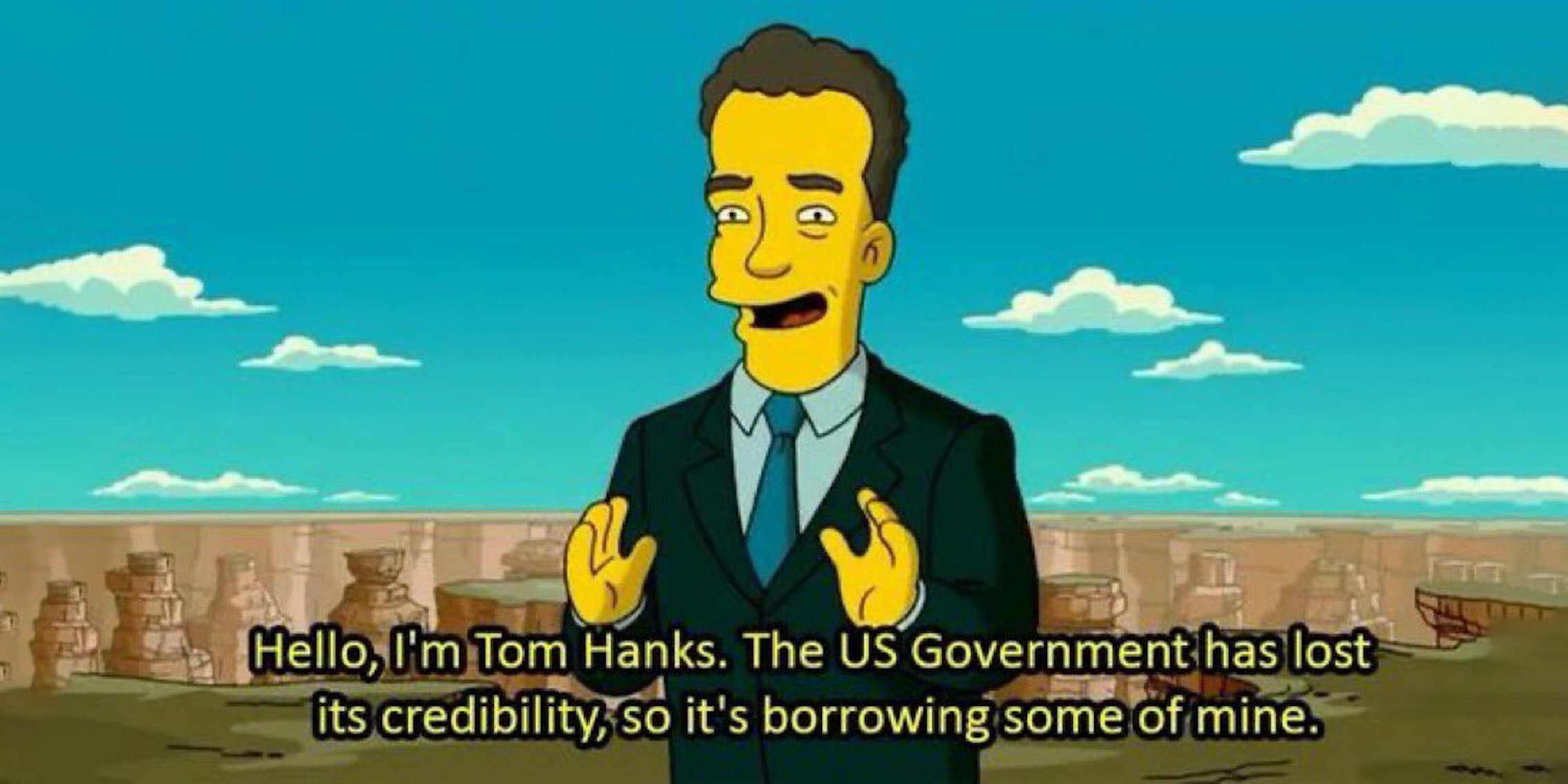 ‘This was literally in The Simpsons Movie’: Biden administration roasted for getting Tom Hanks to narrate a video

'The U.S. government has lost its credibility so it's borrowing some of mine.'

President Joe Biden’s administration is being mocked online after using Hollywood actor Tom Hanks to defend the federal government, a scenario that already played out in the 2007 animated comedy hit The Simpsons Movie.

In an exclusive report on Thursday, Axios revealed that the celebrity A-lister would help mark Biden’s first year of his presidency by appearing in a “video promoting a recovering, resilient America.”

“The video is narrated by Tom Hanks, who was part of Biden inaugural festivities, and features cameos by everyday Americans—a UPS driver, a Teamster from Michigan and a bed-and-breakfast owner in Wisconsin,” Axios writes.

With a new Gallup poll finding that only 40 percent of Americans approve of his performance, Biden continues to face growing criticism from across both sides of the aisle. The issue has been exacerbated by partisan politics, a gridlocked Congress, worsening inflation, and the ongoing coronavirus pandemic.

While the White House likely viewed Hanks as the perfect spokesperson given his universal appeal, it turns out Hanks was used in The Simpsons Movie during a scene in which he was tasked with speaking on behalf of the federal government.

“Hello, I’m Tom Hanks,” he says in the film. “The U.S. government has lost its credibility so it’s borrowing some of mine.”

The ability of the popular animated franchise to unintentionally predict the future, which is already a long-running joke, was too much for Twitter to pass up.

Countless others referenced the scene as well, referring to the effort as nothing more than “government propaganda.”

“The Simpsons gets it right again,” Reclaim The Net wrote. “This time on government propaganda.”

Others accused the Democratic party of poor decision making for using a wealthy celebrity in their video.

Criticisms came in from the other side of the aisle as well, with progressives asking why Biden hadn’t sent them another economic stimulus check. Others praised the video and argued that the appearance of Hanks was a smart move.

When the video featuring Hanks was actually posted to Twitter by the Biden Inaugural Committee, it was similarly praised by supporters of the Biden presidency.

“Beautiful video! For some reason, it has me bawling my eyes out,” one user said.

Despite the back-and-forth, most users appeared to view the footage and its likeness to The Simpsons as a harbinger for continued political and economic woes.