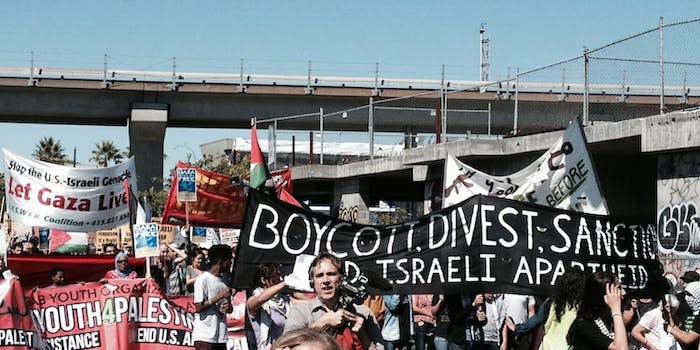 She was fired after refusing to sign a mandatory pledge.

A Texas school district is being taken to federal court for violating the constitutional rights of a children’s speech pathologist who was fired after she refused to sign a pledge not to boycott Israel.

The lawsuit was filed on Monday alleging behalf of Bahia Amawi, who has worked with young autistic and speech-impaired pupils in the Pflugerville Independent School District on a contractual basis since 2009.

On Aug. 13, the school district as normal offered Amawi her annual renewal of contract—and required that she sign an additional pledge.

According to the Intercept, the pledge required that the contractor “not boycott Israel during the term of the contract” and refrain from any action “that is intended to penalize, inflict economic harm on, or limit commercial relations with Israel, or with a person or entity doing business in Israeli or in an Israel-controlled territory.”

In May 2017, Texas became one of several states to pass legislation that prohibits state contracts with those who boycott Israel. The laws primarily oppose the BDS (boycott, divestment, sanctions) movement, an international economic pressure campaign against companies with business dealings in Israeli settlements in the occupied West Bank.

Being of Palestinian descent, Amawi said the she could not sign the contract “in good conscience.”

“If I did, I would not only be betraying Palestinians suffering under an occupation that I believe is unjust and thus become complicit in their repression,” she told the Intercept. “But I’d also be betraying my fellow Americans by enabling violations of our constitutional rights to free speech and to protest peacefully.”

Amawi, a mother of four who was born in Austria and is now a U.S. citizen, worked to provide support for children aged 3 to 11 within the growing Arabic-speaking immigrant community. She spoke with her supervisor at the time to see if there was a way around the additional pledge but was informed that she would have to sign or have her contract terminated.

“Economic boycotts for the purposes of bringing about political change are entrenched in American history,” argues the newly filed lawsuit, in which Amawi is named plaintiff. “The Civil Rights Movement relied heavily on boycotts to combat racism and spur societal change.”

The lawsuit, which ultimately aims to entirely strike down the anti-BDS law, goes on to claim that the pledge requirement violates Amawi’s First Amendment right of free speech.