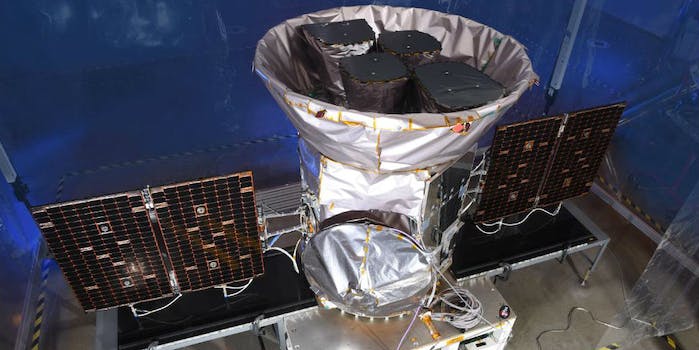 NASA and SpaceX team up to launch a planet-hunting satellite

TESS is expected to find thousands of new planets.

NASA is on the brink of sending a satellite into space that it believes will discover thousands of new planets within the next few years. Called TESS, or Transiting Exoplanet Survey Satellite, the refrigerator-sized satellite is scheduled to fly aboard a SpaceX Falcon 9 rocket on Monday for its two-year trip into orbit.

The launch has been a long time coming for NASA. TESS was conceived in 2006 as a small mission privately funded by individuals at MIT, Google, and the Kavli Foundation. It was proposed two years later as an important NASA mission and eventually approved in 2013.

The satellite’s purpose is to extend the successful mission of the Kepler Space Telescope by observing stars and monitoring them for temporary drops in brightness caused by planetary transits. This will alert scientists of new planets ranging from those the size of Earth to massive gas giants.

TESS improves upon its predecessor in several ways. Not only can it observe more area of space, but it will also look for stars that are 30 to 100 times brighter than those observed by Kepler. It searches for those particular spots because it’s possible to take more detailed measurements of stars that are closer to their sun.

“TESS’s legacy will be a catalog of the nearest and brightest stars hosting transiting exoplanets, which will comprise the most favorable targets for detailed investigations in the coming decades,” NASA notes.

TESS will use four high-powered cameras to observe more than 200,000 stars and is expected to discover thousands of new planets during its two-year stint in space. Of those, around 500 are expected to be Earth-sized or super-Earth planets (planets with a greater mass than Earth), and some should sit in the habitual, or Goldilocks, zone around their respective star.

Over 24 months, TESS will fly in an egg-shaped orbit as far out as the moon, scanning 26 sectors to create a 360-degree view of space around it. All the information it gathers will be beamed down to a lab for algorithms to refine the data and extract important details from it.

“TESS will collect 27 gigabytes per day in its all-sky search for undiscovered planets orbiting 200,000 of the brightest and closest stars in our solar neighborhood,” NASA explains on its website. “That’s the equivalent of about 6,500 song files beaming down to Earth every two weeks. The music of the stars, however, is not as polished for human ears as the latest Taylor Swift album. To get ready for scientific discovery, the data needs a bit of fine-tuning.”

TESS is one of several important pieces of what NASA calls the “Exoplanet Missions,” which got off the ground with the hugely successful Hubble Space Telescope. After its two-year mission, TESS will be replaced by the James Webb Space Telescope, a space telescope scheduled to launch in May 2020.

How do I watch SpaceX launch the NASA TESS satellite?

TESS was originally scheduled to launch aboard the SpaceX Falcon 9 rocket on Monday from the Kennedy Space Station in Florida, but SpaceX announced Monday afternoon that the launch time is being pushed back for additional tests.

If it doesn’t launch Wednesday, NASA still has a launch window for almost every other day this week.

Standing down today to conduct additional GNC analysis, and teams are now working towards a targeted launch of @NASA_TESS on Wednesday, April 18.

When it does happen, you can watch the launch on NASA’s livestream webpage or from the YouTube video below posted by SpaceX.

Update 9:04pm CT, April 18: SpaceX and NASA confirmed the successful launch and separation of the TESS satellite on Wednesday evening.

How many worlds exist outside our solar system? @NASA_TESS launched from planet Earth today at 6:51pm ET to hunt for planets around some of the closest & brightest stars. TESS will use 4 cameras to search nearly the entire sky for unknown worlds. More: https://t.co/5hUW3XhaTo pic.twitter.com/xuH5q0wqN9