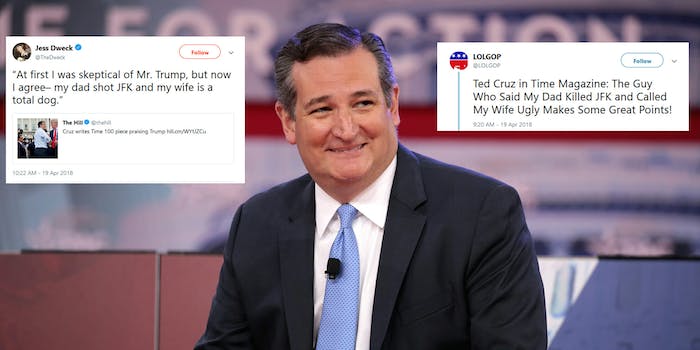 'Ted, have some dignity.'

Sen. Ted Cruz (R-Texas) has been on the receiving end of countless taunts, attacks, and snide remarks from President Donald Trump.

Trump has mocked his wife, insinuated that his father was involved in assassinating former President John F. Kennedy, and even used his “Lyin’ Ted Cruz” nickname on Twitter several times during the 2016 election.

Apparently, all those past comments weren’t enough to stop the senator from Texas from writing a glowing blurb about the president in Time Magazine‘s Top 100 influential people in the world.

“President Trump is a flash-bang grenade thrown into Washington by the forgotten men and women of America,” Cruz wrote. “The fact that his first year as Commander in Chief disoriented and distressed members of the media and political establishment is not a bug but a feature.”

“President Trump is doing what he was elected to do: disrupt the status quo. That scares the heck out of those who have controlled Washington for decades, but for millions of Americans, their confusion is great fun to watch.”

The praise for Trump might seem odd, considering Cruz has called the now-president a “pathological liar” and “narcissist” in the past. The flip-flop on his feelings about Trump was not missed by people online.

Ted, have some dignity. pic.twitter.com/P9PS2h8CKM

Ted Cruz in Time Magazine: The Guy Who Said My Dad Killed JFK and Called My Wife Ugly Makes Some Great Points!

Call me old fashioned, but if I were Ted Cruz and Donald Trump had personally branded me as a liar, suggested he had dirt on my wife, spread rumors that my father assasinated JFK, and was, you know, Donald Trump, I’d probably pass on writing his effusive TIME magazine blurb.

Wow Ted Cruz's love letter to Trump in Time Magazine is A LOT am I the first person to do this please say yes pic.twitter.com/7gQxzwTFCe

“At first I was skeptical of Mr. Trump, but now I agree– my dad shot JFK and my wife is a total dog.” https://t.co/KUxowuCbGh

Maybe the Texas senator was just “lyin'” in his Time blurb?